A Judeo-Persian manuscript from Mashad 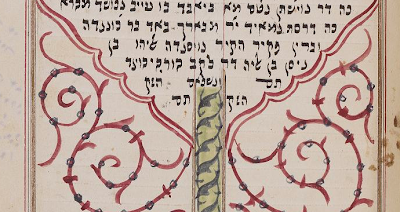 Noam Sienna collects data on the Henna, the pre-nuptial ceremony where the prospective bride and groom have their fingernails painted or adorned in order to bring luck and fertility in their future marriage. Sienna has uncovered a 19th century book depicting the Persian-style henna of Joseph and Zulaikha (Potiphar's wife).  What is most unusual is that the book was written in Hebrew characters in the city of Mashad, where Jews forcibly converted to Islam (Jadidim) continued to practise Judaism in secret. (With thanks: Michelle)

Specifically, I have been fascinated by the henna shown in an unusual Judeo-Persian manuscript, held in the library of the Jewish Theological Seminary in New York, MS1534. The manuscript is available online in a high-resolution scan via the Dr. Georgette Bennett and Dr. Leonard Polonsky Digitization Project.

In this post I go over the history of the manuscript and offer some analysis of its historical context. If you want to see the henna, just skip right down to the bottom. According to the colophon [scribal inscription], the book was calligraphed by a scribe named Eliyahu ben Nissan ben Eliyah, known as ‘Gurgi’ [the Georgian], and he completed the book on the Jewish date of 12 Av, 5612 corresponding to the Muslim date, Dhu al-Qa‘dah, 1269 A.H. (this corresponds to Tuesday August 16, 1853 C.E.).

What is most interesting, though, is that the book was written in the city of Mashhad — we’ll get to that in a moment. The text is a transcription of the tale of Yusuf [Joseph] and Zulaikha [Potiphar’s wife], as told by the great 15th-century Sufi poet and philosopher Nur ad-Din ‘Abd ar-Rahman al-Jami in his work Haft Awrang [Seven Thrones].

But when this manuscript was written, the Jadidim were still Jewish in secret. The manuscript, in fact, opens with an image of the mi‘raj [ascension] of the Prophet, a very famous and popular topic of Muslim iconography. The Prophet is absent (already in Heaven?) but his miraculous steed Buraq is pictured, with four angels. Ariella Amar suggests that perhaps “the owner of this manuscript was a Jew constrained to live outwardly as a Muslim, who camouflaged his Jewish identity by adding this miniature of the Mi‘raj” (2012, pg. 110). Other than the Hebrew alphabet, there is nothing about this text to suggest the owner’s Jewish tendencies; the text is a legitimate pious Muslim telling of the story (rather than Shahin’s Judeo-Persian version), the illustrations, as noted above, are indistinguishable from Muslim illustrations of the period, and the manuscript opens with the mi‘raj.

And even the Hebrew script could have been explained; although living as Muslims the Jadidim continued to use the Hebrew alphabet, and it was even taught in the maktab [Islamic school] that they attended! Patai writes that “[Mullah Hasan, the teacher] even learned from a Jew the Jadidi alphabet, the specific Hebrew script used by the Jews of Meshhed…. Mullah Hasan did not know that the Jadidim faithfully adhered to the Jewish religion, and he considered the Hebrew script merely a kind of historical relic from their past. Until the years of WWII, whenever a Muslim asked about it, the Jadidim always gave this explanation for their interest in knowing the Hebrew script” (1997, pg. 210). On a Muslim marriage certificate of the Jadidi community, written in Persian, 1888, the witnesses’ signatures are in Hebrew (Patai, 1997, pg. 249).

I would argue that there is also perhaps a special significance to the choice of text — the story of Yusuf/Joseph is the story of a Jew forced to live among non-Jewish Egyptians, who despite hardships and temptations never loses his faith. While he disguised himself as an Egyptian, Joseph never forgot his true heritage; and when the time came, he revealed himself to his brothers and rejoined his family. I imagine that this story must have had deep resonance, and even comfort, to a Jadidi living in Mashhad; perhaps they commissioned this story as a reminder that like Joseph in prison, if they could keep their faith they would one day be rewarded. According to Moreen, the colophon records that Eliyahu Gurgi’s “purpose for copying this manuscript was to admonish his contemporaries and encourage them to improve their behaviour” (1985, pg. 22).

Read article in full
Posted by bataween at Sunday, August 04, 2013

"The manuscript, in fact, opens with an image of the mi‘raj [ascension] of the Prophet, a very famous and popular topic of Muslim iconography."

Islamic scholars explain the importance of Joseph in the Islamic corpus as proof of the prophethood of Muhammad, and it is possible that this was used as a tool for proselytizing among Jews and Christians in their language. Others say that Muhammad saw a parallel between his relationship with his own kin (the Quraysh tribe) and Joseph's relations with his brothers as well as a warning to the Quraysh of things to come like with Joseph who at the end was the one who had the upper hand.


PS: I am not an expert on Islam but I became interested in the subject when I stumbled upon a song (on a CD!)in Judeo-Maghreban that is based on the Muslim version and had been passed on in one family who may or may not have known that it is not from the Biblical story.

Much of the Quran is in fact a rehash or retelling of Jewish stories, from the Tanakh [Jewish Bible] and the Midrash, etc. But the text of the Quran is often choppy. That is, a story breaks off before its conclusion, which we can see especially if the story comes from a non-Muslim source like the Tanakh, New Testament, Midrash, etc. For instance, the Quranic story of Solomon and the Queen of Sheba is taken from the Midrash, not the Bible. But the Quranic version does not come to the end but just breaks off.

Moreover, there is a whole genre of tales in the Muslim tradition called Isra'ilyyat. These stories and accounts are either from the Jewish tradition or purport to be so. Over time, the Muslims became hostile to this body of stories and used the name Isra'iliyyat in a pejorative sense. Just as they tended to become more hostile to Jews over time.

Wow! What a pleasure to see my article featured on this blog — a blog which I read regularly myself!

Sylvia, as I discuss in the article, the text used is the story of Yusuf and Zulaikha as told by the Muslim Sufi poet Jami, based on the Qur'an. The iconography, as discussed, is a separate question. But since the Joseph story is very important in Judaism as well, I wonder if there is some significance to that. Clearly, since it is written in Hebrew letters, it is intended for the Jewish community.