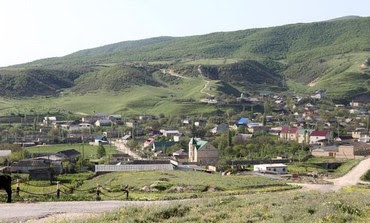 A village in Daghestan (photo: Reuters)


Antisemitism is suspected as the motive for the shooting of a Chabad rabbi in the Muslim republic of Dagestan. Since this report appeared in the Jerusalem Post, the rabbi has been flown to Israel for treatment: (with thanks: Anonymous reader)

Update: The President of Dagestan has blamed the attack on one of the most extremist Islamist groups operating in the Chechnya-Caucasus region (The Algemeiner)

Rabbi Ovadia Isakov, 40, an emissary of the Chabad-Lubavitch hassidic movement, was shot and seriously wounded in Derbent in the Republic of Dagestan on Thursday.

Isakov, identified as chief rabbi of Derbent by Chabad sources, was wounded in the lung after being shot from behind by an unidentified assailant not far from his home.

The attack took place as the rabbi exited his car to enter his home in the predominantly Muslim republic.

He is currently in intensive care and reported to be on a respirator.

Russian Chief Rabbi Berel Lazar has made arrangements to fly Isakov to Israel for further treatment “as soon as his condition stabilizes,” according to Chabad’s website.

The website also reported that Russian authorities believed the attack might have been motivated by the rabbi’s Jewish appearance. Police said they were considering “religious motivations” but were exploring all leads.

The rabbi’s house had been vandalized in 2007.

Dagestan, a republic of Russia, has a history of Islamic insurgency and has served as a battleground in clashes between Chechen rebels and federal troops.

Read article in full
Posted by bataween at Friday, July 26, 2013