Do something about Arab antisemitism 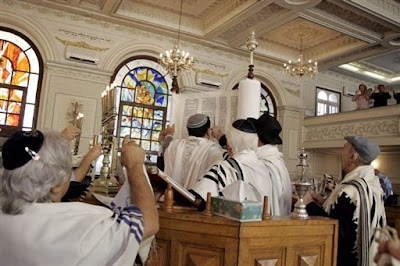 
Numbers of Jews in the Arab world don't lie: there is unfathomable antipathy toward not merely Israel but Jews, writes David J Michaels in the Jewish Journal. That kind of dehumanisation would not be tolerated against other groups.

Sadly, there can be little dispute of the ubiquity and intensity of anti-Semitism in Arab and other Muslim-majority lands. After all, these are the societies where remarkably many folks continue to believe that 9/11 was a Zionist plot, that the Holocaust is a fabrication, that a now-despised native son such as Muammar Gadhafi was Jewish and that Jews are fated to violent subjugation as the “sons of apes and pigs.” It then becomes a bit more understandable, if no less frightening, that two random Israeli boys, happened upon by random Palestinians, could be stoned to death in 2001.

The relative paucity of Jews has also not disincentivized terrorist attacks over recent years at synagogues and other Jewish sites in Istanbul, Turkey; Casablanca, Morocco; Khashef, Yemen; and Djerba, Tunisia, let alone Hezbollah’s atrocities as far away as Argentina.

People expressing reasonable, measured criticism of Israel cannot, of course, be considered anti-Israel or anti-Semitic. However, animus to Zionism itself—simply the existence of the democratic Jewish state—frequently betrays denial of Jews’ basic rights and history.

Natan Sharansky has identified three elements that signal where criticism of Israel crosses over into bigotry: delegitimization, double standards and demonization. In 2005, the European Monitoring Centre on Racism and Xenophobia (now known as the European Union Agency for Fundamental Rights) essentially echoed these terms. The Vatican, too—in its official dialogue with Jews in 2004 and, more subtly, in the document “The Church and Racism,” distributed at the United Nations’ now-infamous 2001 Durban conference on racism—has recognized the clear correlation between anti-Zionism and anti-Semitism.

While anti-Semitism has existed in many regions, the modern Arab world stands out with the dramatic flight of its Jews. The Jewish population in Arab countries has dropped from some 800,000 six decades ago to perhaps 6,000 today, not to speak of the exodus from neighboring non-Arab Muslim countries. These numbers don’t lie. The Pew Global Attitudes Project has confirmed unfathomable antipathy toward not merely Israel but “Jews” both in Arab states and non-Arab Muslim states far removed from any territorial dispute with Israel. In all but one of the seven nations surveyed, 96 to 98 percent of respondents had negative views of Jews; in Indonesia, a slightly less commanding 91 percent shared this outlook.

Needless to say, the kind of dehumanization to which so many mainstream Arab opinion-shapers subject Israelis and Jews would not be tolerated against other groups.

Read article in full
Posted by bataween at Monday, July 08, 2013

First, let him do something about Jewish American antisemitism, judeophobia, ethnic discrimination and that embarrassing uniquely Ashkenazi narcissism. Those people legitimize Arab and European antisemitism. Personally, I would feel safer in an Arab country (of my choice of course:)) than in an American Reconstructionist synagogue packed with a dozen "rabbis" from "Voice for peace".

Second, give credit to those Arab or Muslim countries that fight terrorism and educate their populations against antisemitism and xenophobia. Just as a small example, it would be only right to mention in the caption under the synagogue of Casablanca that three of the surviving Casablanca terrorists were sentenced to death in 2006.

Third, do some research as to the specific patterns of antisemitism and their perpetrators, not only in the Arab world, but also in Europe. What do they have in common? What is their purpose? Is it the media, the government, or loose imams? The left? The salafists? Who?

But above all, avoid generalizations which are counterproductive.

I've been to Morocco recently, and I admit having been favorably impressed with the sense of responsibility displayed in the media (national TV, newspapers, radio).

What Arab countries fight anti-Semitism? Name them, Sylvia. And how dare you call Ashkenazim narcissists? I guess during the nine days you still have to show "baseless hatred." And why do you think that anti_Semitism in Europe is so high again? HUH? Because of the large population of moslems..that is why. Remember Ilan Halimi and what they did to him? Know about Malmo, Sweden? What about all the attacks against Jews in France? So why don't you write an article if you are so intelligent.