Only 14 Jews left in Egypt 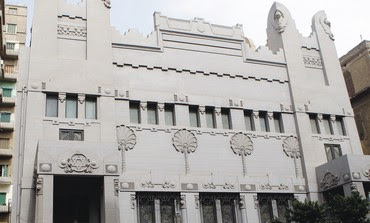 
There are only 14 Jews left in Egypt, and they need the ministrations of a rabbi and government aid to pay for medical care, acccording to their new leader, Magda Haroun, in this JPost interview with Kenneth Bandler of the American Jewish Committee. Although the AJC has established a fund for the maintenance and preservation of Jewish cultural, religious and historical landmarks, including cemeteries, Haroun again shows her willingness to abdicate responsibility for Egypt's Jews and their heritage to Christians and Muslims.

‘I knew that one day I would be the one that closes the door,” says Magda Haroun, one of Egypt’s last Jews. Numbering 80,000 more than 60 years ago, today only 14 remain. “It is sad and very heavy to bear.”

Haroun became president of Egypt’s Jewish community in April, following the passing of longtime community leader Carmen Weinstein. She comes with a dual commitment – enable the remaining Jews, mostly elderly and in need of assistance, to live in dignity, and ensure that the door on this historic community’s legacy will always be left ajar. To that end, she vigorously is making arrangements for the preservation of cemeteries, synagogues and other Jewish heritage sites.

“It is my duty as a Jew and as an Egyptian,” says Haroun. She has spoken a lot with Egyptian media, reinforcing the historical fact that Jews have always been integral to Egyptian society. “We don’t want secrecy about Jews. Egyptians have to know.”

Her immediate concern is finding ways to give the older Jewish women in Cairo “an easy end of life.” Ideally, she would like to establish a home where they could live together, and receive medical attention and social support. Three of the nine women in Cairo are in need of hearing aids and two require cataract surgery. The other three Jews in Egypt, one man and two women, also elderly, live in Alexandria, the Mediterranean city that was home to the country’s second largest Jewish community.

“Our community economically is worse than the economy of Egypt,” says Haroun. “We have no resources.”

The Egyptian government had provided a $1,000 monthly stipend for the Jewish community, but that lapsed following the revolution that brought down the Mubarak regime. Haroun recently sent a letter to the Ministry of Welfare requesting resumption of this vital assistance, and is optimistic that the government will restore the monthly allowances. “The Egyptian government should help these ladies who chose not to leave Egypt and are alone,” she says.

She also is seeking support for sustaining religious practice. “We asked the government to provide a rabbi and kosher food,” says Haroun. “I want a rabbi 24 hours a day, all year long. It is our constitutional right.”

Though not raised in a religious home – Haroun attended synagogue only on major holidays – she is deeply committed to assist, however she can. She lived abroad for 12 years for business reasons in Kuwait, Hong Kong, Tokyo and Istanbul, but returned home to Cairo in 1992. Egypt, she told me on a recent visit to the US, is her home.

The Egyptian Jewish community, once one of the largest in the Arab world, fell victim to the hateful politics of Arab leaders who punished local, centuries-old Jewish communities in vengeful response to Israel’s independence.

“One of the mistakes of the Arab regimes was to throw them away, to push the Jews through the open door,” says Haroun, who was born just days before the 1952 Nasser revolution. Most Jews left Egypt unwillingly after 1948 and the rise of Nasser, with additional waves exiting after the 1956 and 1967 wars.

More about Magda Haroun
Posted by bataween at Tuesday, June 25, 2013

My thoughts and prayers with the Jewish community in Egypt. I wish to visit Magda Haroun and the other elders when I visit Egypt.
Souzan Abdelmassih
An Egyptian Copt!

dear Bataween
just in case OT - I found the article linked to herein quite interesting especially since I understood Davutoglu in his AlJazeera interview as promoting the benevolence of the Ottomans.

The immigration from Arab lands, he explains, is motivated by distress, and if conditions get worse we can't keep people out.

The Palestinian mantra is "right of return" - does it also
apply to the one million Jews forced out of the
Levant during the last fifty years? Regarding, the
million of dollars in currency and property abandoned
by Jews when they left; are the governments planning
restitution? Jews know the score -they're never returning and they will never be compensated. We know not to whine - just get on with it and accomplish something positive wherever you live. One day, the Palestinians will grow up, get real and try to improve themselves and the world around them.