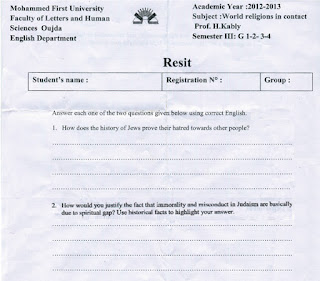 The lecturer who set the offensive exam questions has been suspended.

The Moroccan university lecturer who set antisemitic questions in an English exam paper has been temporarily suspended.


The move comes after a storm of criticism in Morocco. A condemnatory blog post by Fahd Yata in La Nouvelle Tribune received hundreds of 'Likes', mainly from young internet surfers.

The chairman of the Human Rights Council, Driss El Yazami, announced that an inquiry would be launched into the issue. Several media condemned the antisemitic exam questions as 'an insult to Morocco's proverbial tolerance and a violation of the Moroccan Constitution.'

Ahmed Gayet, chairman of of the Association of Plural Moroccans, has publically condemned the lecturer, who is from the university of Oujda.

The French Jewish site JForum said that 'one swallow doesn't make a summer', but asked whether Morocco's condemnation of antisemitism might set an example to France.

As highlighted on Point of No Return, Essaouira-based blogger Noam Nir mentioned the scandalous questions in his article for the Hebrew newspaper Maariv.

The questions read as follows:

Answer each one of the two questions given below using correct English :

1) «How does the history of Jews prove their hatred towards other people ?»

2).«How would you justify the fact that immorality and misconduct in Judaism are basically due to spiritual gap? Use historical facts to highlight your answer».