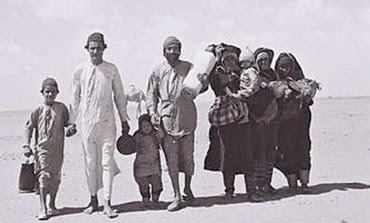 Last month, Ottawa once again took the international lead in raising an issue important to Israel and Middle East peace. The Harper government initiated hearings in the Canadian Parliament on the matter of Jewish refugees from Arab countries. David Weinberg explains in the Jerusalem Post why others should follow the Canadian initiative: (with thanks : Lily)

The hearings are part of a new push by Jewish groups (including Canada’s Center for Israel and Jewish Affairs, which I represent in Israel, and the World Jewish Congress) to highlight the plight of the Jewish refugees in the context of the Israeli- Palestinian conflict. The issue is important because it highlights the justice of Israel as the legitimate expression of an indigenous Middle Eastern people. Shimon Koffler Fogel, CEO of the Center for Israel and Jewish Affairs, told the House of Commons Standing Committee on Foreign Affairs and International Development that Canada should officially recognize the persecution and displacement of more than 850,000 Jews from the Middle East and North Africa.

“Much of the Arab-Israeli peace process is about validation, of the legitimacy of Israel as a Jewish state and the recognition of the Palestinians as a people,” he said. “Redress for Jews displaced from Arab countries is another example of this, and needs to be included for true and lasting peace to be achieved.” Fogel noted: “Achieving peace in the Middle East is not a zero-sum game. The rights and claims of one group need not come at the expense of or displace those of the other. And thus, the purpose of incorporating the historic claims of Jewish refugees from Arab countries is not to diminish or compete with the claims of Palestinian refugees. The inclusion of the issue of Jewish refugees is meant to complete, not revise, the historical record.”

As gavel-holder of the multilateral refugee working group (a moribund product of the 1991 Madrid Peace Conference), Canada is uniquely placed to raise the profile of the Jewish refugee issue and to ensure that it is given the fair consideration it merits.

The initiative in Canada needs to be repeated everywhere. In fact, there is a bill pending introduction in the US Congress which will require the State Department to report annually on what it has done to advance the Jewish refugee issue.