Jews and their food belong in the Middle East

A student at UC Berkeley, California, commenting on the Nakba for Policymic,  Sarah Katz has seen the light:

"It makes sense that the losing side would feel indignant. Indeed, many Arabs have referenced the existence of the State of Israel as the most potent evidence of lasting Western influence in the region.
They equate the fact that many Jewish refugees fled to Israel from Europe, as well as U.S. support of Israel, with the Jewish state being a sort of watchdog for Western profit off Middle Eastern land.

"However, what this argument fails to address is the existence of a Middle Eastern Jewish majority in Israel. Sasson Somekh, author of the popular memoir Baghdad, Yesterday is such a Jew who tells of his journey from Iraq to Israel in light of the growing oppression of Jews within Iraqi society.

"Another immigrant to Israel, a Persian Jew named Roya Hakakian, describes her immigration to Israel ( sic - she actually fled to the US - ed) during the Islamic Revolution in her homeland of Iran, in her memoir Journey from the Land of No. Why would immigrants such as Sasson and Roya wish to support Western imperialism? Surely, they had another reason to escape to Israel. Indeed, in the face of such events, one must consider origin of Jews in the Middle East. Even today, the majority of Jews in Israel are of Middle Eastern origin, not because they wished to serve the interests of imperialism by a country to which they had never been, but because they felt safer in their newly established homeland than in their countries of birth.

"In fact, Middle Eastern food and music are a primary part of Israeli culture, as Israel is truly a Middle Eastern country. When we disregard religious differences, from falafel to traditional Arab music, contemporary Israeli culture is basically one and the same as its neighboring cultures."

When she wrote those words Sarah Katz could have been thinking of the latest 'food war' over za'atar, a mixture of oregano and thyme popular in Israel. When an Israeli-American called Debra Kamin wrote a short piece extolling the herb for The Atlantic, she found herself on the opposite end of a barrage of Twittered indignation claiming that Israel had stolen za'atar from its Arab neighbours. Debra protested: 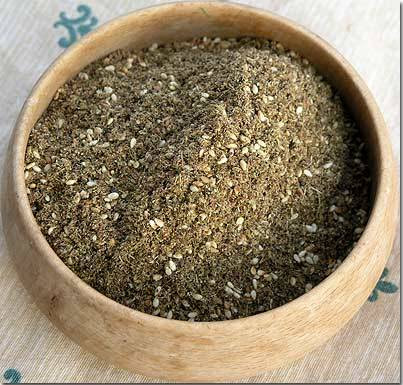 "It's just food: harmless, delicious, and totally benign. It's certainly not political.


"The feud between Israel and its neighbors is complicated, but the food that they share need not be.

"But then last week I wrote a short, simple, 200-word piece on the herb blend for an Israeli newspaper, explaining the spice to tourists who visit the country and might be curious about it. And suddenly, faster than you can say "retweet," I realized that in this part of the world, it's not just land that's contentious. It's the very contents of your lunch.(...)

"Israeli food, like much of Israeli culture, has long been ladled from a steaming melting pot. Food staples here run the gamut from Yemenite baked dough ( jachnun) to Austrian pounded meat (schnitzel, which is stuffed into pita bread at the same rate as the ubiquitous falafel) to the mushy, hardy ghetto fare of Eastern Europe that reminds our bellies of the ghosts who never made it out.
But despite our tensions with our neighbors , Israel is in the Middle East. Our soil is as Levantine as that of the Muslims who surround us, and while Israel is young, its culinary traditions are ancient and they are linked to the land. We eat za'atar here because its ingredients are grown here, weaned from the earth just as the biblical seven species -- barley, dates, figs, grapes, olives, pomegranates, and wheat -- are.

"That doesn't make za'atar Israeli, but it also doesn't make it Palestinian or Lebanese. This is a high-density zone, with a history of tectonic migration and displacement. Nothing is steady here, least of which the passing of flavors and foods.

"There are major issues in this region, some of which may never be solved. But if I learned anything this week, it is this: Sparring over who came first to a fistful of oregano and thyme is absurd."

Read article in full (via BBC Watch)
Posted by bataween at Saturday, June 08, 2013

Last December, Israeli born London restauranteur Yottam Ottolenghi and his partner/head chef Arab Israeli Sami Tamimi, were interviewed at length on CBC Radio on the publication of the Jerusalem cookbook. Tamimi said the best kibbeh was the kibbeh that came from the kitchens of his Iraqi Jewish neighbours.

In New York City a couple of years back, there was much consternation when an Israeli Jewish chef won the falafel making contest.

And yes, there's all the BS about who "owns" humus.

But even Askenazic Jewish cooking shows its middle eastern roots from time to time, with its fondness for distinctly un-European flavour combinations and fondness for certain vegetables -- roasted eggplant, etc., that herald our Eastern Med roots.

Hell -- British fish + chips -- is becoming attributed to the arrival of Sephardic Jews frying fishcakes made of cod and making the fish go further by frying up potatoes.