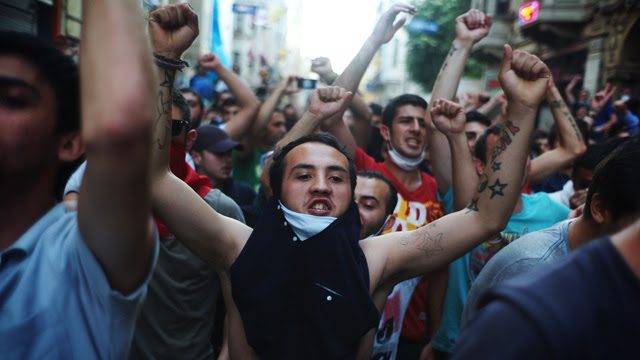 It was only a matter of time before Turkey's Prime Minister Erdogan would blame the 'Joos' for his domestic troubles. David Harris of  The American Jewish Committee has expressed his concern:

For several weeks, Turkish citizens have demonstrated against the government, which has responded with force and arrests. Erdogan has called the demonstrators "terrorists."


In a letter to Turkey's ambassador to the United States, AJC expressed concern about Erdogan's "delusional prejudices" regarding Jews. The prime minister recently suggested that unrest in Turkey could be attributed to "the interest-rate lobby," a term that in the past has been associated in the Turkish media with an alleged conspiracy of Jewish businessmen.

Over the weekend, the Turkish newspaper Yeni Şafak ("New Dawn") claimed that an American Jewish plot is behind the Istanbul protests. The paper asserted that several Washington, D.C., foreign policy experts, several of them Jewish, had developed a so-called "Istanbul Insurrection" plan that allegedly is a blueprint for the confrontation unfolding in Istanbul. The article further claimed without explanation that AIPAC and the American Enterprise Institute, misidentified as an Israeli organization, were involved in organizing the "plan."

"Whatever protests and opposition Prime Minister Erdogan may face domestically, they are home grown," said Harris. "To blame such disturbances on external forces and to resort to age-old Jewish conspiracy canards is pure cowardice and runs the risk of incitement. Erdogan should be called to task by responsible world leaders for such crude tactics rather than facing up to the reality that a significant segment of the Turkish public is challenging his authoritarian rule."

Read statement in full
Posted by bataween at Tuesday, June 18, 2013