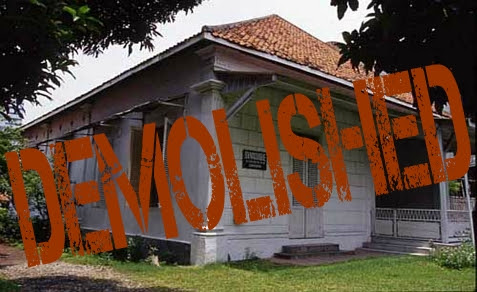 The unstoppable march of sharia law in Indonesia has claimed another victim: the Surabaya synagogue in Java. The Jewish Press reports:

Over the last few days there have been several articles bemoaning the destruction of the last standing synagogue in Java, which is one of the islands of Indonesia (south of Viet Nam, north of Australia, for the geographically challenged).

The story had a human interest news hook: six American university students were visiting Indonesia to learn about “pluralism and democracy.”  Oops.  Not only was the only synagogue on Java demolished, but it had already been sealed off in 2009 by Muslims who also burnt an Israeli flag in response to the conflict in Gaza, according to the Jakarta Globe.

The Jakarta Globe article quoted lecturers from a local university who claimed that the American students still learned one or two things about pluralism from the city.

“They learned about how the residents form a pluralist and democratic community,” said Diah Ariani Arimbi, dean of the Airlangga University School of Literature.

That sounds awfully odd.  But sadly enough, it may be true.

Email ThisBlogThis!Share to TwitterShare to FacebookShare to Pinterest
Labels: Islamism, Jews of indonesia