Hebrew version of 'In Ishmael's House' is launched 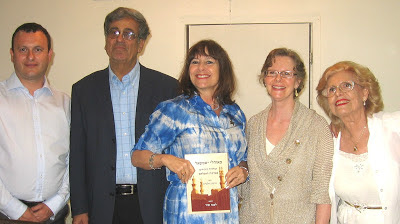 Point of No Return reports on a remarkable event:

Some four years ago, a group of Egyptian Jews sat down in Levana Zamir's living room in her Tel Aviv apartment to share stories with Sir Martin Gilbert. These first-hand accounts of the Second Exodus were to find their way into 'In Ishmael's House', the first popular history of Jewish communities spanning 14 Arab and Muslim countries to be produced in English by the world-renowned historian.


That day, Levana Zamir, president of the Association of Egyptian Jews in Israel, determined that a Hebrew translation of Sir Martin's book was imperative:  most Jewish refugees - Levana's family included - had fled to Israel. Their children should know the sacrifices their parents had made, she said, so that they would be able to grow up in a country where no one would call them 'a bloody Jew'. Levana worked doggedly with Sir Martin. After he was taken ill, she worked with his wife Esther, herself a historian, to polish  up the Hebrew version.

The launching of the Hebrew translation of Sir Martin's book was put together virtually at the  last minute. The convalescing author was represented in Israel by his wife Esther: the late initiator, Israel Asper, was represented by his daughter Gail. Together with Knesset member Shimon Ohayon and translator Levana, they came together at the Centre for Egyptian Jews in central Tel Aviv last week. The guest of honour was H.E. Matthew Gould, the British ambassador to Israel. Visitors included Yves Fedida of the Egyptian-Jewish association Nebi Daniel, Maurice Maleh of the Association of Jews from Egypt in the UK, Itsik Devash, JJAC representative, Meir Cahlon of the World Organisation of Jews from Libya, and Lyn Julius of Harif.

The author of 88 books including a biography of Churchill, Sir Martin Gilbert is one of the leading British historians of his generation. But the impetus to have Sir Martin document the story of Jews from Arab lands came from a Canadian philanthropist who died 10 years ago, Izzy Asper.

By a stroke of luck, Izzy Asper's daughter Gail was in Israel; Esther Gilbert,  Martin's wife happened to be there too. Levana could not have hoped for a better attendance of distinguished guests. Mrs Gilbert spoke of some of the characters in her husband's book: Maimonides, the medieval rabbi heavily influenced by Islam and Arabic, the Yemenite orphan who had escaped to Israel in order to avoid  forcible conversion to Islam; the Ottoman Sultan Majid, whom Sir Moses Montefiore had pleaded to protect the Jews following the scandal of the 1840 Damascus blood libel. Yet Sir Martin ended his book on a hopeful note: that Muslims and Jews might renew their 14 centuries of ties. 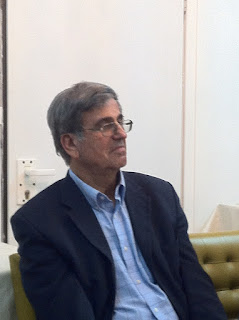 MK Shimon Ohayon of the Israel Beiteynu party is now spearheading the Knesset campaign for justice for Jewish refugees. He has recently proposed a bill formalising 30 November as Jewish Refugee Day.

Dr Ohayon said that the time had come for the Jews of the Middle East and North Africa to tell their story. During the 14 centuries of  Muslim Jewish interaction, there were times of cultural and linguistic symbiosis - Hebrew grammar, for instance, was based on Arabic. But there were those who would deny 14 centuries of coexistence: haters and bigots had forced  a conference of Jews of Morocco  to be moved from the University of San Francisco to the University of Maryland.  In spite of the points of connection, he reminded his audience that there were also dark times of oppression and pogroms. In the second half of the 20th century, 'Arab' lands were emptied of their millenia-old Jewish communities, driven out by mass expulsion and persecution. These Jews left behind their heritage and all their assets and property.

The day belonged, however, to the indefatigable translator Levana Zamir, who one audience member likened to a 'supertanker'. In addition to her skills as author, artist and baker extraordinaire of Ma'amoul cookies, Levana had, only weeks earlier, organised a successful conference on Egyptian Jews in Nahariya. Never was the old adage truer: if you want something done, ask a busy person.

The launch of the Hebrew version, 'Ba'Ohalei Ishmael', was a landmark event. All the speakers hoped that if the history of the Jews in Muslim lands were better known, it would validate israel as a refugee haven and would provide a vehicle for peace, understanding and reconciliation with the wider Muslim world.

Yes indeed, Levana is extraordinary!
Merci and chokran for every thing you are doing for us Jews from Egypt.
sultana