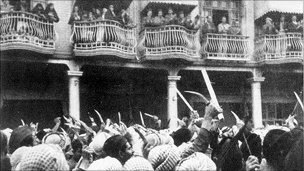 Articles such as this one by David B Green in Haaretz is perhaps a sign that the mainstream press is becoming more aware of  seminal events to affect Jews in Arab countries - like the Farhud, whose anniversary according to the Gregorian calendar fell at the weekend. (With thanks: Lily)


June 2, 1941, was the second and final day of the anti-Jewish pogrom in Baghdad that became known as the Farhud. The Farhud (literally, “violent dispossession”) not only took the lives of hundreds of Jews, and wounded many more; it also spelled the beginning of the end of Iraq’s ancient Jewish community, nearly all of whose 135,000 members had left the country within a decade.

Iraq, under British mandatory rule since 1921, had become semi-independent in 1932, although it remained under British supervision. But by the spring of 1941, it had also become a focus of German efforts at destabilization, as the Third Reich attempted to dominate the Middle East on a number of fronts. Conquest of Iraq would have given the Germans access to the country’s vast oil fields, and might have proved decisive in the war, at a time when the Allied fortunes were at low ebb.

On April 2, 1941, a military coup, led by an anti-British politician named Rashid Ali al-Kailani, overthrew the pro-British government of Abdul Ilah, the regent, and began to challenge the British right to maintain troops in the country. On May 25, Hitler announced his intention to “move forward in the Middle East by supporting Iraq.”

Already, for nearly a decade, the German Embassy in Baghdad had sponsored efforts to expose the Iraqi populace to Nazi messages, and had been inviting intellectuals and military officers for visits to Berlin. A newspaper bought by the embassy actually published “Mein Kampf” in Arabic. Also advancing German interests in Baghdad was the presence of Haj Amin al-Husseini, the former mufti of Jerusalem and a radical Palestinian nationalist; he served as a liaison between Rashid Ali and Berlin, and was considered dangerous enough by parts of the Jewish community back in Palestine that the Irgun concocted a plot with the British by which David Raziel, one of the underground paramilitary group's founders, would fly a mission into Iraq and kidnap Husseini. At the same time he would bomb and destroy the country’s oil refineries, thus denying this vital resource to the advancing German army. Raziel’s mission was ended when a German plane shot him down.

The British organized a counter-coup, and on May 30, Rashid Ali and his colleagues fled from Baghdad, while Regent Abdul Ilah planned to return to the city to resume his leadership. It was important to the British that the move was not being imposed from outside, and although their forces had effectively reoccupied the country, they did not accompany Regent Ilah when he re-entered the capital on May 31.

June 1, 1941, coincided with the celebration of Shavuot, and the Jews of Baghdad, who comprised about 90,000 of Iraq’s 135,000-strong Jewish population, felt secure enough to celebrate the festival openly. There are several different theories as to what set off the riots of the Farhud, but the result was that on June 1, soldiers and policemen who had been loyal to Rashid Ali, together with members of the Futtuwa, an Iraqi version of the Hitler Youth, began to attack Jewish neighborhoods. They were joined by ordinary Iraqi civilians. Their goal was to kill, but they also looted and destroyed Jewish-owned homes and businesses.

The official Iraqi report on the Farhud concluded that between 130 and 200 Jews were murdered during the rioting, but British diplomatic records suggested that the number was as high as 600. Efforts to arrive at verifiable estimates were made more difficult by the Iraqi refusal to let the Jews bury their dead according to Jewish custom, and instead the bodies of the victims were interred in a mass grave. Another 600 people were wounded, and untold numbers of women were raped, while more than 1,500 businesses and homes were attacked and looted.

The destruction was able to continue for two days because of the explicit decision by the British ambassador, Sir Kinahan Cornwallis, to keep British troops out of Baghdad. It was also Cornwallis who had not taken measures to purge the Iraqi government of its pro-Nazi elements after the escape of Rashid Ali and the return of Regent Ilah. Cornwallis also neglected to make anything other than cursory mention of the rioting in his own dispatches back to London.

Israeli historian Esther Meir-Glitzenstein has written that the readiness of Iraqis to attack the country’s Jews, who had lived peacefully and productively in the land since the time of the destruction of the First Temple, can be attributed to a perception of Jews as both supportive of the British and as pro-Zionist. In fact, active involvement in the Zionist movement really only picked up during the decade that followed the Farhud. Indeed, for the Jews themselves, the Farhud was a shocking event, one that led to a growing sense of physical insecurity.

After the establishment of the State of Israel, in 1948, the atmosphere only became more uncomfortable for Iraq’s Jews, and it was perhaps inevitable that they would depart the country for Israel. The government fired many Jews from the civil service, and Jews found themselves on trial for espionage. The Zionist administration in Palestine stepped up its efforts to bring Iraqi Jews to Israel, and Operations Ezra and Nehemiah did just that between 1950 and 1952.

Article in Swedish by Tobias Petersson referencing the Farhud (with thanks: Torbjorn)

Farhud is the Jewish Naqba
Posted by bataween at Monday, June 03, 2013