Erdogan's government 'bad for the Jews' 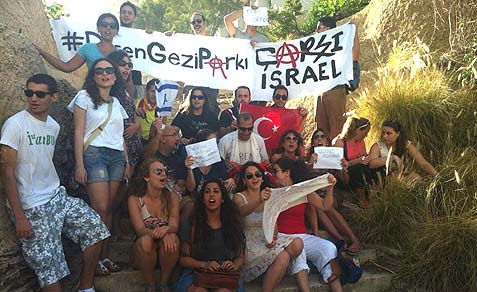 
The Israeli tourists have stopped coming, journalists are being muzzled, alcohol banned and Turkish Jews see less and less of a future for their children.  As the Turkish Spring protests play out in Istanbul's Taksim square Rachel Avraham interviews two Turkish-Israelis for the Jewish Press:


According to Eyal Peretz, chairman of Arkadash, an organization promoting the Turkish community in Israel, “The Jewish minority in a very extreme fundamentalist state is not a positive situation. Of course a secular state is a much better situation for minorities. I hope there will be a change soon.” He continued, “Many Jews made immigration to Israel. I am sure if it will become worse, by Islamic laws, we will see Aliyah to Israel from Turkey.” Peretz worries that Erdogan is taking Turkey in the direction of Iran, by forbidding people from showing affection in public and restricting alcohol consumption.

Peretz also claims that the atmosphere Erdogan created within Turkey is very problematic for Jews. He explained, “You don’t see a future for your child. If you are old, you will die in Turkey. When you are a young person with a small child, you think, do I want my children to be raised in an Islamist state? You will say no. You are doing it for the future, not the present. You don’t see the future. You don’t see your children raised in an Islamist state. The community is becoming smaller and smaller; they don’t want their children to marry Muslims and they are coming to Israel. I think Turkey loses from that.”

Sivan Tfillin of the leader of the Kemalist Charshi Movement in Israel concurred that Erdogan’s government has been bad for Jews, claiming, “Erdogan is the one who ruined the friendship between Israel and Turkey. Israeli people are now scared to go to Turkey because of Erdogan. By the way, there are a lot of Muslims in Turkey that are convinced that Israel is a bad country because of the media. A lot of people that get to know me say Israelis hate Turks. […] Turkey is a really good friend of Israel and we shouldn’t let Erdogan ruin the friendship.”


Both Peretz and Tfillin expressed that Erdogan is trying to brutally suppress dissent. Peretz emphasized that presently, Turkey has more journalists in prison than any other country in the world , “more than Russia, more than China, more than Iran.” This fact is confirmed by Freedom House, which ranks Turkey as only partly free. He explained, “It says something of this fragile democracy, if you could call it a democracy. I don’t think a country that imprisons journalists is a democracy. People are afraid that Turkey will become an autocracy or something worse, like Libya or Syria.” Peretz complained that the Turkish people were barred access to international media outlets.

According to Tfillin, “Two years ago, when the Arab spring started, I was talking with my friends in Turkey and asked if the same will happen in Turkey. It’s hard because every one is afraid of him. Some journalists had to resign to because of Erdogan. After the Mavi Marmara, I have a friend who works in the news who said he can’t show any thing against him. Erdogan controls the press. All of the Turkish channels are showing shows and pop stars, not the protests. They don’t show anything except for one. We only have facebook and twitter.” Given this, Erdogan is responsible for the fact that Jews are now the main target of hate speech in the Turkish media, according to the Hrant Dink Foundation.

Read article in full
Posted by bataween at Monday, June 10, 2013