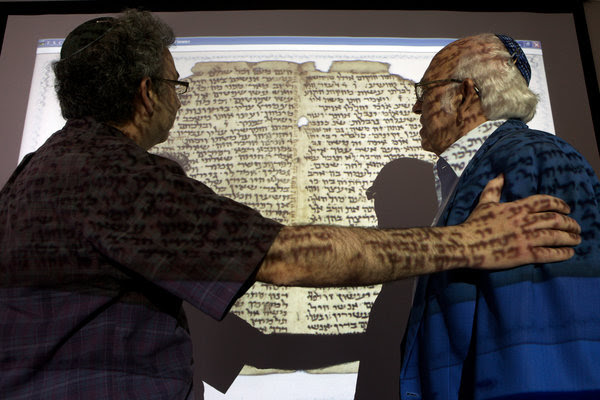 
A sophisticated computer programme is to help re-assemble more than 100, 000 document fragments collected across 1,000 years that reveal details of Jewish life along the Mediterranean - the New York Times reports. For decades, scholars relied mainly on memory to match up pieces of the 9th c. Cairo Genizah, a treasure trove of papers scattered across 67 libraries and private collections. It includes works by the rabbinical scholar Maimonides, parts of Torah scrolls and prayer books,  poetry and personal letters, contracts, court documents, even recipes.

“The thing it really makes possible is people from all walks of life, in academia and out, to look at unpublished material,” said Ben Outhwaite, head of the Genizah Research Unit at Cambridge University, home to 60 percent of the fragments. “No longer are we going to see a few great scholarly names hoarding particular parts of the genizah and have to wait 20 years for their definitive publication. Now everyone can dive in.”

What they will find goes far beyond Judaica. Mr. Outhwaite’s team, for example, has uncovered a prenuptial agreement in which Faiza bat Solomon made her fiancé, Tobias — nicknamed “Son of a Buffoon” — promise to “abandon foolishness and idiocy,” and “not associate with corrupt men,” or face a hefty penalty of 10 gold dinars. Another document spells out a legal agreement between Sitt I-Nasab and her husband, Solomon, preventing his mother and sisters from entering his wife’s quarters or making “any request of her at all, not even a match.”

There is also alchemy: combine mercury, horse manure, pearl, white alum, sulfur, clay mixed with hair and “a couple of eggs,” one fragment advises, and “you will obtain good silver, God willing.”
Marina Rustow, a historian at Johns Hopkins University, said about 15,000 genizah fragments deal with everyday, nonreligious matters, most of them dated 950 to 1250. From these, she said, scholars learned that Cairenes imported sheep cheese from Sicily — it was deemed kosher — and filled containers at the bazaar with warm food in an early version of takeout.

Most towns had three kinds of synagogues: Iraqi, Syrian and Karaite. The triangle formed by Egypt, today’s Tunisia and Sicily was an important trade route in the 11th century; the Malabar Coast via the Red Sea and Aden were big in the 12th. And the best-sellers were not fancy items like spices, glass, gold and brass, but flax and soap. “Everyone wore linen all the time,” Professor Rustow explained.

She is now studying recycled documents — Arabic government decrees, for example, with liturgical text scrawled on the other side.

“What does that mean about the connection that Jews may have had to the government?” she asked. “What does it tell us about the archiving processes of 11th-century governments?”

Those are questions no computer can answer. Indeed, even the matchmaking requires a human touch. Once those 12 billion potential pairs are digitally compared, the computer will offer lists of a few hundred probable “joins,” but it will be up to scholars — or hobbyists — to confirm.

BBC Radio 3 broadcast five programmes on the Cairo Geniza from 27 - 31 May 2013. We hope the programmes will be available as podcasts soon. (with thanks: Yoram)
Posted by bataween at Sunday, June 09, 2013