A tribute to 'three good men and true' 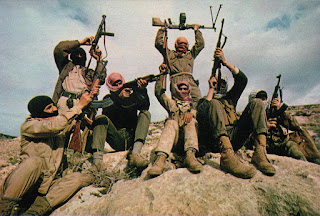 A group of PFLP fighters

Last week, the Global Forum on Antisemitism in Jerusalem hosted  Muslims prepared to speak up against hate speech and nail their colours to Israel’s mast. It is heartening  that, albeit small, they are an increasingly vocal minority. Lyn Julius of Harif - the UK association of Jews from the Middle East and N Africa - pays tribute in the Times of Israel to three she has been privileged to know:

"Allow me to tell you about three astonishing individuals that I have been privileged to know. All three are of Middle Eastern origin living in the West. I hesitate to call them ‘Muslims’: Two would vehemently reject the label. One is avowedly secular; another converted to Judaism. Only the third is a devout Muslim. All three have ploughed the lonely but risky furrow of moral clarity in a confused and misguided world. Their pursuit of what they believe is right has invited threats and intimidation against themselves and their families. So as to protect their identities, I will refer to them only as ‘A’, ‘B’ and ‘C’.

"‘A’ is a Shi’a from what was once a Jewish neighbourhood of Baghdad. He came into contact with few Jews before he was forced into exile in London. Volunteering aged 19 to fight for the ‘Palestinian cause’, he was assigned to a rocket-launching unit with the Marxist PFLP on the Israel-Syrian border. He was shocked to discover that the Palestinian cause treated the fighters as mercenaries, paying them on a sliding scale according to results. But this is what really opened his eyes : if he were ever disarmed in combat, he was told not to run to his comrades-in-arms, who would kill him. He should instead give himself up to the Israelis. They would spare him his life.

"Since that transformative moment, ‘A’ has considered himself a friend of the Jews. He sees Arab society as a tribal collection of Mafia-style gangs, whose Beduin culture treats human life as a worthless commodity. In order to survive, these gangs are ready to lie, steal and kill. ‘A’ looks forward to a Middle East of normalised relations between Arab states and Israel.

"My friend ‘B’ is a Muslim religious scholar and teacher. Like ‘A’, ‘B’ is a philosemite. The Koran, he argues, supports the legitimacy of the Jews’ claim to the land of Israel. He advocates a reformist interpretation of Islam so that problematic Koranic verses are not taken literally.

"‘B’ has been outspoken against the proponents of political Islam in the West, who engage in double-speak to conceal their real aim: to impose a Caliphate on non-Muslims by force. He campaigns to educate non-Muslims about Jamaat-e-Islam extremists: these hide behind ostensibly moderate ‘front’ groups in order to gain respectability. ‘B’ tries to encourage other faiths not to talk to these people, as it marginalises genuinely moderate Muslims. But his is an uphill struggle for truth, fraught with danger.

"My third friend ‘C’ is an Egyptian political scientist born in Cairo. Of the three, he has travelled furthest down the road of breaking with his past, going as far as to convert to Judaism. He is one of that rare breed – a dual Egyptian-Israeli citizen. Educated in a Coptic school with Christians, Greeks and Armenians, ‘C’ grew up with a sense of the now-vanished cosmopolitanism of Egypt. He has a vision of a new Middle East faithful to its ancient roots, in which national and religious minorities would take up their rightful place. Pan-Arabism – unity on the basis of a common language – has failed. Pan-Islamism on the basis of a common religion offers only violence, oppression and subjugation. Time to redraw the map of the region."