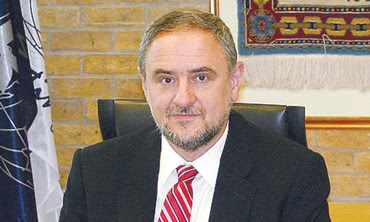 Jewish Refugees from the Middle East were on the agenda at the World Jewish Congress plenary in Budapest this week. Some 500 delegates from 70 countries took part in an hour-long session discussing the issue, Point of No Return has learnt.

Led by president Rabbi Elie Abadie and director Stan Urman,  members of the Justice for Jews from Arab Countries Board were present at the Budapest meeting and several were billed to address the delegates.

The delegates passed a resolution urging the international community to recognize the legitimate rights of Jewish refugees in the Middle East who were forced to flee their countries after 1948.

Robert Singer, whose appointment as WJC secretary-general was ratified at the Budapest plenary, pledged to continue the work of his predecessor Dan Diker, who chaired the September 2012  WJC conference in Jerusalem calling for Justice for Jewish Refugees. The Jerusalem conference, organised in association with the Israel Ministry of Foreign Affairs, was followed by a high-profile meeting on Jewish refugees in the UN building in New York.

The man most credited with thrusting the issue to the fore is Israel's former deputy foreign minister Danny Ayalon. Robert Singer pledged to keep up the momentum generated by Mr Ayalon.


WJC resolution on Jewish Refugees from Arab Countries: Plenary Assembly of the World Jewish Congress, meeting in Budapest on 5-7 May 2013,

that upon the declaration of the State of Israel in 1948, the status and treatment of Jews in most Arab countries deteriorated dramatically as many Arab countries declared war against Israel,

RECORDS that the treatment of Jews by Arab leaders and Muslim populations varied from country to country. In some places, Jews were forbidden to leave (e.g. Syria); in others, Jews were displaced en masse (e.g. Iraq); in some countries, Jews faced edicts of expulsion (e.g. Egypt); while in others, Jews, especially those in Morocco, lived in relative peace under the protection of Muslim rulers;

FURTHER RECORDS with great sadness that in virtually all Arab countries a variety of different measures were taken pursuant to official decrees and legislation enacted by Arab regimes, including: denial of human and civil rights to Jews and other minorities; expropriation of their property; stripping them of their citizenship; and other means of livelihood, with Jews often being victims of murder, arbitrary arrest and detention, torture and expulsions, which together with political upheaval, resulted in the mass uprooting of more than 800,000 Jews from their countries of birth in some 10 Arab countries where the Jewish population is now virtually non existent;

RECALLS that on two separate occasions, in 1957 and 1967, the United Nations High Commissioner for Refugees (UNHCR) declared that Jews fleeing from Arab countries were indeed ‘bona fide’ refugees who “fall under the mandate of my (UNHCR) office”;

NOTES HOWEVER that when the issue of ‘refugees’ is raised within the context of the Middle East, people invariably refer to ‘Palestinian refugees’, not Jews displaced from Arab countries;

FURTHER NOTES that neither the mass violations of human rights nor the displacement of Jews from Arab countries has ever been recognized and adequately addressed by the international community;

RECALLS that during that same period, there have been: no UN resolutions; no support provided by UN agencies; and no financial assistance forthcoming from the international community, to ameliorate the plight of Jewish and other refugees from Arab countries;

FURTHER RECALLS that in all relevant international bilateral or multilateral agreements, (i.e. UN Resolution 242, The Road Map, The Madrid Conference, etc.), the reference to ‘refugees’ is generic, allowing for the recognition and inclusion of all Middle East refugees including not only Jews, but also Christians and other minorities; that the Knesset, the Government of Israel and the US Congress, have underscored the importance of pursuing rights and redress for Jewish refugees from Arab countries and that the World Jewish Congress has been a strong voice in highlighting this issue in the United Nations and to governments around the world; that it would constitute an injustice, were the international community to recognize rights for one victim population - Palestinian refugees - without recognizing rights for other victims of the very same events, being Jewish refugees from Arab countries;

REITERATES its call to the international community to recognize the rights of and provide redress to, the Jewish refugees who were forced to leave their native Arab countries in the years and decades following Israel’s independence in 1948;

RESOLVES as a matter of high priority,to elevate the status and urgency of the issue of the rights of Jewish refugees from Arab countries, including by galvanizing political action, encouraging public education and action campaigns and outreach to the media; pursuing rights to their identity, protection and preservation of their heritage sites, religious patrimony and cemeteries; and raising these rights and the means to achieve their redress, in all meetings with governments, heads of state and or senior officials, and in particular the United Nations and member states of the Quartet.
Posted by bataween at Friday, May 10, 2013