Why Jewish refugees are central to quashing BDS 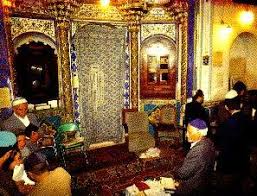 A synagogue in Iran

Two weeks ago, a resolution was passed by the students of Berkeley, California, to boycott, divest from and sanction Israel.  Aryella Moreh, whose family are Jews from Iran, explains in the Daily Californian why the story of the uprooting of Middle Eastern Jewish 'people of colour' and their resettlement in Israel is central to frustrating the efforts of the BDS campaign. (With thanks: JIMENA)

I come from a family of refugees. My mother was younger than I am now when she was forced to flee for her life from the Islamic Revolution of Iran. My mother recalls being forced to sit in the back of her classroom along with a group of young Jewish children during her school years.

When my mother went to buy groceries in the market, she was not allowed to touch the produce because she was considered a “dirty Jew.” These are only a few indicators of the systematic oppression of the Iranian Jews, some of the oldest inhabitants of Persia. At the age of 20, she was forced to abandon her life in Iran as her family was scattered across the world. My grandmother, Mamanjani, was never allowed to return home because of her active involvement in Jewish organizations. Though she had no ties to any other government, she was warned not to go home for fear of execution without trial. Despite calling Persia home for 2,500 years, in 1979, my family and many Jewish families like my own were forced to forced to flee their homes. My family’s home, business and property was confiscated. We were torn from our homes, forced to flee to whichever country would take us in.

Though these experiences define me, some students on our campus seem to think my history does not count. During the “divestment” meeting two weeks ago, Students for Justice in Palestine tweeted about those opposed to divestment: “the Zizis are literally white people crying about their privilege, lol.” Apparently, Zizi is SJP shorthand for Zionist. And later, Daily Cal Blogger Noah Kulwin discussed a clear division he seems to see between “students of color” and “Jewish students,” implying that Jewish students like me cannot be considered students of color. I am here to address ignorance about what truly defines the Jewish people. Amid claims — or rather accusations — of “privilege” or the inability of Jews to understand the plight of “colored people,” I realized many people on this campus are unaware of who the Jewish people actually are.

My story is not unique among those who stood against divestment. Many of my peers who spoke against divestment come from families that experienced similar persecution before making it to America. For some, it was the Iraqi Farhud, where hundreds of Jews were killed and injured as Baghdad’s Jewish community was destroyed. For others, it was the oppression Jews faced under Soviet rule in Russia. And for others still, it was the Holocaust of Eastern Europe. But although they come from different corners of the globe, these Jewish students are here for a single reason: because making it to America was the difference between a new life and death in the countries they used to call home.

In the second half of the 20th century, millennia-old Jewish communities throughout the Middle East and North Africa were completely destroyed. The number of Middle Eastern Jewish refugees like my parents is on par with the number of Palestinian refugees following the Arab-Israeli War of 1948. {not correct - there were more Jewish Refugees (870, 000 v 711, 000) and that number does NOT include post 1979-Iran Jewish refugees - ed}

Not every Iranian Jew achieved asylum in America. For those who were not fortunate enough to make it here, Israel was the only country to which refugees could go. That’s what it means to have a Jewish State. It is a place — the only place — Jews like my family are guaranteed security. For our senate to refuse to recognize Israel as the Jewish State means that they are refusing to acknowledge my right to a place where my family, and others like me, are safe.

The pro-divestment movement wants you to believe that its cause is a struggle between the ethnic minority Palestinians and the “white” and “privileged” Jews and Israelis. By pretending that Jews are white Europeans, they argue that Israelis are foreign occupiers. But Jews are not a homogenous group of white people; we are an ethnically Middle Eastern people, comprising many unique communities from across the globe. After centuries of persecution, we have found security in this country and in our nation’s first home, Israel. And although we have achieved the privilege of statehood, our personal histories are defined by our recent struggles.

Read article in full
Posted by bataween at Tuesday, May 07, 2013

If the BDS movement was comprised of rational people, the fact that Israel's Jewish population runs the entire spectrum of skin pigmentation and have returned from as near as Egypt, Lebanon and Syria matters no more than the fact that the Palestinian nation includes some very recent arrivals, largely from the eastern Mediterranean and untold numbers of Jews who converted to Christianity or Islam in order to survive.

This student is correct, most of the anti-Israel crowd is desperate to portray all Jews as white people from Poland and Russia.

It's really sad how the Arab world has committed cultural genocide of the Sefardi-Mizrahi communities and no one knows about it. I've talked to so many anti-Israel activists who were shocked when I told them the story of my family in Syria.

When did your family leave Syria?

Important insights by a young woman.

This Kulwin creature is either very ignorant or very dishonest. The reality was opposite to what he claims [actually he was apparently indoctrinated with his false claims by sophisticated psywar operatives sent out by well-funded Judeophobic bodies, maybe like the Ford foundation that funded many of the anti-Israel outfits at Durban in 2001 when bds got its big push]. In fact, in traditional Arab-Muslim society it was the Muslims who were privileged and Jews & other non-Muslims who were deprived --especially the Jews-- according to Muslim law. Even Karl Marx knew that in his day. So Kulwin's lies are insidious since they embody a clever, although false, Judeophobic narrative.

My grandparents left in the aftermath of the riots of 1947.