This Shavuot pogrom haunts us still 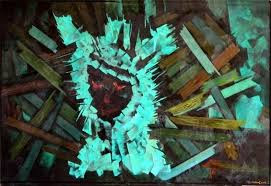 A scene from the Farhud of 1941 by artist Nissim Zalayet

Over 70 years later, the Nazi demons unleashed by the Farhud pogrom in Baghdad are still with us, argues Lyn Julius in The Times of Israel. The Arab war against Israel is simply a continuation of the ethnic cleansing it started:

Salim Fattal was just eleven when the two-day Baghdad pogrom known as the Farhud erupted on Shavuot 72 years ago, yet its memory is engraved deep in his soul. Despite the passage of time, the shrieks and wails of the pogrom’s 179 Jewish victims still echo in his ears.

On 1 June, the first day of Shavuot in 1941, Fattal, his widowed mother and four siblings endured unimaginable terror, as he describes in his vivid memoir In the Alleys of Baghdad:

Helpless Jews had been cornered in their homes and fallen easy prey to robbers, murderers and rapists, who abused their victims to their heart’s content, with no let or hindrance. They slit throats, slashed off limbs, smashed skulls. They made no distinction between women, children and old people. In that gory scene, blind hatred of Jews and the joy of murder for its own sake reinforced each other.

Salim’s uncle Meir was pulled off a bus by a raging mob baying for Jewish blood, and never seen again.

Salim and his family managed to get through the night unscathed by bribing a local policeman to stand guard over their house. Haggling over how much he would be paid for each bullet he fired at the rioters, the policeman finally settled with the family at a quarter of a dinar for each shot.

The Farhud (Arabic for “violent dispossession”) marked an irrevocable break between Jews and Arabs in Iraq and paved the way for the dissolution of the 2,600-year-old Jewish community barely 10 years later. Loyal and productive citizens comprising a fifth of Baghdad, the Jews had not known anything like the Farhud in living memory. Before the victims’ blood was dry, army and police warned the Jews not to testify against the murderers and looters. Even the official report on the massacre was not published until 1958.

Read article in full
Posted by bataween at Wednesday, May 15, 2013

that is why, we must stand by Israel so that nothing of the kind can ever happen again!
sultana

I cannot understand why the Israeli government did not speak about the plight of jewish refugees from arab countries for almost 50 years, while the UN kept passing resolution after resolution on the plight of palestinian refugees. Are the Israeli government officials and diplomats stupid? If they had talked about the subject, maybe the palestinians would not have felt that they were the only ones who were displaced and/or mistreated, and it would have been much easier to reach peace.