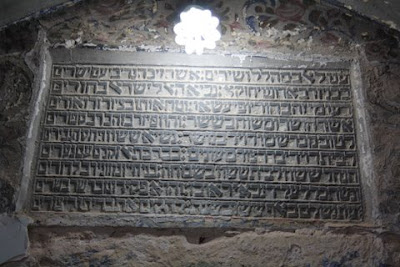 Hebrew inscription, Ezekiel's tomb, Iraq. The JJAC Report recommends that the US send a fact-finding mission to assess the state of 13 Jewish sites in Iraq.

"With the ‘Arab Spring’ came great hopes and expectations for democracy and greater freedoms for all citizens in the Middle East, North Africa and the Gulf region", says a new report by Justice for Jews from Arab Countries (JJAC) on antisemitism in Arab countries published this month. Sadly, matters are worse, especially for minorities in Arab countries.  Against this bleak background, Morocco stands out as an exception.
( Point of No Return was apparently the source for much of the material in this report.)

This Report cites media accounts of blatant anti-Semitism, incitement and discriminatory practices, specifically targeting Jews and Judaism, replicated in virtually all Arab countries. Taken individually, each act or statement may appear less than consequential; taken together, they represent a disquieting litany of antagonism against Jews.

It is true that in all Middle East Arab countries, Israel and Zionism are primary targets of Arab rancor. Yet, virtually all of the media references cited in this Report make no mention of Israel and/or Zionism. The antipathy is directed against Jews and Judaism – not Israel. The specious accusations foments hatred against all Jews, irrespective of where they may live.

This past year, the last Jew in Algeria assisted by a Jewish international aid society, Mrs. Esther Azoulay, passed away in July 2012. 2 Our sense of loss was magnified with the recent passing of Carmen Weinstein, the long-time leader of the Jewish Community of Egypt. These losses are symbolic of the inexorable march towards the extinguishing of the once-vibrant Jewish life and communities in Egypt, Tunisia, Libya, Algeria, Morocco, Lebanon, Syria, Iraq, and Yemen.
Yet to-day, in these countries virtually devoid of Jews, anti-Semitism continues to run rampant, incitement against Jews persists, and many Government leaders, party officials, clergy and academics seek to thwart normal relations between Muslims and Jews.(...)

Findings:
 Violence against Jews – There were three reported deaths of Jews in Tunisia, Yemen and Morocco. Government leaders, party officials, clergy and others regularly engage in ‘a call to violence’, urging their followers “to shoot the Jews”; “to kill the Jews – it’s a religious duty”; that Jews “deserved to be killed”; “annihilate them”; that Islam “instructs Jihad against Jews”; “drive them out of our countries”; “nurse hatred for them”; and that “loathing Jews is a form of worship of Allah”.

 Anti-Semitism/Incitement Against Jews – There is an tendency to demonize and humiliate the Jews who are called “apes”, “pigs”, “monkeys”; “donkeys”; “dogs”; and a “cancer” on the world.
Moreover, the portrayal of Jews is fraught with conspiracy theories as Jews are accused of “trying to poison the Prophet Muhammad”; “a source of evil in human society”; that “Jews spread corruption on earth”; that “Jews spark Wars”; that “every catastrophe in the world is the handiwork of Jews”; that 9/11 was “a theatrical show run by Jews”; that Jews control the world’s gold”; that “Jews use porn to corrupt Muslims”; that “Jews support whorehouses”; that “Jews have no history”; that “the Jewish religion is a fairy tale”; that “Jews use slaughtered victims blood to make Purim sweets”; etc.

In light of these vile characterizations, many in Arab countries seek to thwart relations with Jews, including: the cancellation of a concert that a Jewish singer was to give in Algeria; Jews being jailed upon their return to Libya; cancellation of invitations to Jews to attend meetings and conferences in Arab countries; film on Jews causes an uproar in Egypt; Jews excluded from a National Dialogue Conference in Yemen; and threats made against any Jews wishing to return to Egypt.

 Abrogating Freedom of Religion – As exemplified by the enforcing of Shari’a law in Egypt; blocking Jewish pilgrimages; preventing services in synagogues on Jewish holidays; issuing fatwas preventing Jews from visiting their own holy sites; and

The Report's conclusions are as follows:
In the absence of previous such Reports, it cannot be statistically shown that anti-Semitism in Arab countries in 2012 differed from previous years. However, as an anecdote, before the advent of the ‘Arab Spring’, Jews were able, with some discretion, to visit virtually every Arab country. To-day, such travel is being discouraged by Arab regimes (e.g. forbidding pilgrimages; arresting returning Jews; etc.);

2) International efforts are required to underscore the need to preserve Jewish religious and/or holy sites in countries where there are no longer any Jews. The appropriate UN, international Jewish entities, human rights groups, etc. – must be called upon to assist in protecting Jewish holy sites, including tombs, cemeteries, synagogues, etc.; and

3) The United States should be requested to send a fact-finding mission to visit 13 Jewish holy sites in Iraq; assess their condition; and recommend ways to have the locations preserved and protected as Jewish holy sites.

To access the Report click on 'After the Arab Spring: Antisemitism against Jews in Arab Countries' on the JJAC website.
Posted by bataween at Sunday, May 26, 2013

How anybody with ANY realistic view of the world could have had "great hopes and expectations for democracy and greater freedoms for all citizens in the Middle East, North Africa and the Gulf region" during the "arab spring, is mindboggling. I'm gobsmacked that anyone would have the temerity to make such a statement.