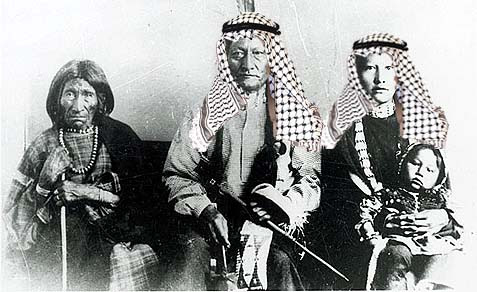 The Jews are the real natives


The latest wheeze among Palestinian propagandists is to make comparisons between themselves and 'native American Indians', much to the irritation of some, reports Rachel Avraham in Jewish Press. In fact it is the Jews who were the native indigenous inhabitants of the region - and continuously inhabited Palestine until their mass return in the 20th century.

According to Ward Churchill, a professor of ethnic studies at the University of Colorado, 12 million Native Americans used to inhabit North America in 1500. They were the continent’s first original indigenous human inhabitants and some of the tribes referred to their ancestral homeland as Turtle’s Island. Yet today, after experiencing massacres, persecutions, outright racism, ethnic cleansing, systematic oppression, and having their traditional lands colonized by European settlers who refused to permit them to live beside them even if they were peaceful and adopted aspects of European culture, their population size was reduced to 237,000 by 1900.

During the infamous Trail of Tears, about 20,000 Cherokees were forcefully expelled from their homes and sent on a death march, where up to 8,000 of them perished. The Cherokee nation endured all of this suffering, despite the fact that they were very much assimilated into the society, rejected utilizing violence, and had legal documents in their possession demonstrating what land was supposed to belong to them. It was one of the darkest chapters in American history.

Despite all Palestinian propaganda points to the contrary, the Palestinians are not Israel’s “Native Americans.” In fact, the Jewish people, composed of the twelve tribes of Israel, not Muslim Palestinian Arabs, made up the majority of the population in Israel up until 135 CE, when the Jewish people through massacres, brutal oppression, persecutions, and ethnic cleansing were forcibly made into a minority within their own country. Just like the Native Americans, the fact that Jews were made into a minority within their own country does not rob them of their indigenous status nor does it imply that they abandoned their country.

Read article in full
Posted by bataween at Wednesday, May 01, 2013

Ward Churchill is a well known plagiarist and fraud. He claimed to BE native American until it was revealed he is not. He often speaks glowing of terrorists against the US and Israel.

The attempt to use Native Americans to stoke their claims to Eretz Israel is nothing new for the Palestinians. It is an old tactic from the 1970s.

Unfortunately, many if not most North American aboriginals identify with the Palestinians, clearly without a clue as to the solution the likes of disgraced "anti-Zionist" Lebanese American jouralist Helen Thomas proposes for accommodating Israeli Jews: send them "back to Poland or settle them in California" ... on land stolen from the North American aboriginals by western Europeans only a few centuries earlier.

There are even some Islamist groups on North American university campuses that claim Natives Americans were Muslim first and then became Christians!
Secondly, like the previous anonymous said there is probably much viewing Palestinians as non white colonized oppressed excluding that Mizrahi Jews, Sabateans, Berbers, Assyrians are the natives of the mideast not Arab Muslims.

The fact remains that over 80% of "Jews" living in Israel today have no Hebrew blood. The dispersion and the assimilation Hebrews throughout time in various countries and cultures ie Africa, Iberia, North America (see Phoenician travels to north America) have left most of us with actual blood ties to Abraham, Isaac and Jacob completely disconnected from our original culture and homeland. Do a DNA treat and see what's in your blood. The Palestinians on the other hand are Semetic as opposed to the Ukrainian, German and Polish Jews occupying a land they have no claim to.

The fact remains that over 80% of "Jews" living in Israel today have no Hebrew blood. The dispersion and the assimilation Hebrews throughout time in various countries and cultures ie Africa, Iberia, North America (see Phoenician travels to north America) have left most of us with actual blood ties to Abraham, Isaac and Jacob completely disconnected from our original culture and homeland. Do a DNA treat and see what's in your blood. The Palestinians on the other hand are Semetic as opposed to the Ukrainian, German and Polish Jews occupying a land they have no claim to.