Kurds could blaze the trail for Jews 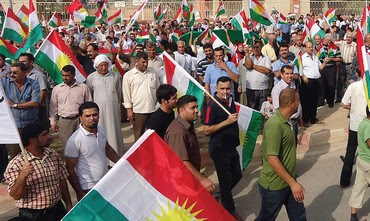 
The disintegration of Syria could provide an opportunity for the Kurds - and that could be good for the Jews, and other minorities, Dan Diker and Harold Rhode write in the Jerusalem Post.

What stands behind most of the violence in Syria, Iraq, Lebanon and other areas is Arab Sunni fundamentalism in its various forms – whether Salafi, Wahhabi, or Muslim Brotherhood. All forms of radical Islam threaten the existence of the Alawites, Kurds, Lebanese Shi’ites, Christians, and other members of the non-Sunni ethnic and religious groups, including non-fundamentalist Sunnis.

This Arab Muslim “zero-sum game” culture defines their view of Kurds and other minorities, including Israel. Just as the Arab Sunni Muslims in general relentlessly “hunt” Israel, they would only accept a permanent solution in the Middle East by which they conquer and control the region, and – according to classical Islamic dogma – eventually the entire world.

But tectonic shifts triggered by the Islamic revolutions over the past few years may succeed in liberating the region from Sunni Arab imperialism and create a better future for the region’s minorities. The Kurds, while overwhelmingly Sunni, see the Muslim Brotherhood and the Wahhabis by and large as Arab imperialists trying to force them to abandon their Kurdish identity and become Arabs – probably the reason most Kurds loathe the Muslim Brotherhood.

For the Brotherhood, being Sunni is not enough. In their view, only Arabs can be true Muslims. Non-Arabs must abandon their languages and cultures and adopt an Arab identity – the same attitude which explains how most of the Middle East became Arab and Muslim during the first century of Islam.

The shifts are important to the Kurdish future. The Kurdish self-governing authority in Northern Iraq, Syria’s unraveling into geographical units comprised of Alawites, Kurds, Arab Sunnis and other ethnic groups, and Turkish Prime Minister Recep Tayyip Erdogan’s recent outreach to Turkey’s Kurds could result in a more pluralistic governing structure for a new Middle East whose centers of power are more dispersed.

In this context, the legitimacy and success of the Kurdish national project across the region could blaze a new path for other minorities. It could also help Israel.

For example, Iraqi Kurdistan’s success as an autonomous area or a potentially independent state may influence a process of self-determination for other sects, tribes, ethnic and religious groups.

Shared challenges make Kurds and the Jewish state good potential allies. Like Jews, the Kurdish people have lived under foreign domination for millennia.

Kurdish suffering under Arab, Turkish and Iranian rule infuses them with a natural affinity for Jews and Israel.

There are an estimated 35 to 45 million Kurds in the Middle East, many of whom have been secretly sympathetic to Israel for years and have even been labeled “Zionist agents” in Iraq, Syria and Iran.

The addition of millions of potential Kurdish friends, for micro-sized Israel with a mere eight million inhabitants, could enhance the Jewish state’s security and regional position. While Jews were always considered politically and socially inferior in the Arab Middle East, Kurds generally did not discriminate against Jews, nor have they demonized Israel. In short, geography, history and destiny create natural affinities and interests between Kurds and Israelis.

Read article in full
Posted by bataween at Thursday, May 30, 2013