Iraqi Torah scroll fragments to be buried in NY 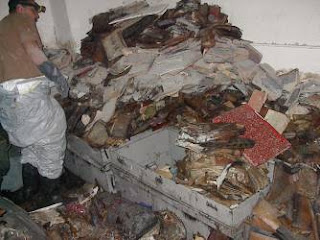 
Fragments of Torah scrolls,  unfit for use (Psoulim)  and beyond repair or preservation, are to be handed over to the Iraqi-Jewish community and buried in their cemetery in New York, Point of No Return has learnt. They were seized by Saddam Hussein's secret police along with other artefacts and books belonging to the Baghdad Jewish community and shipped to Washington for restoration.

The request by the US-based World Organisation of Jews from Iraq (WOJI ) to bury the scroll fragments has been approved by the Iraqis, according to Iraqi media reports. Iraq's National Security Adviser confirmed the decision to WOJI, but no date has been fixed for the handover. The Iraqi government would arrange the approval through a written document agreed with the State Department, but the process has been painfully slow.


The so-called Jewish archive consists of hundreds of items seized from Jewish homes and synagogues in the 1970s by the Iraqi Muhabarat, or secret police.  US soldiers found them during the 2003 invasion, floating in the sewage-flooded basement of the Muhabarat's headquarters. A tug-of-war has ensued between the Iraqi government and those who argue that the documents should stay in the US, or be returned to the Iraq-Jewish community from which they were stolen. The vast majority of Iraqi Jews and their descendants live in Israel.


Items from the collection are due to be displayed in a special exhibition at the National Archive and Records Administration in downtown Washington DC this autumn.
Posted by bataween at Saturday, May 11, 2013

Do I understand correctly that it is just fragments that are to be buried and that the status of the bulk of the archive remains unresolved?

You understand correctly. It is customary for unuseable or 'pasul' Torah scrolls or holy books to be buried.
The status of the bulk remains unresolved, but the Iraqis are insisting on the whole archive to be returned.

And the Iraqi position is outrageous. Why aren't American Jewish groups lobbying and pressuring on this issue where the facts are clear that all this is stolen Jewish property, stolen by the Iraqi govt??

I hope WOJI will have people on hand when the exhibit happens to look at the artifacts and try to identify living owners. There will be quite a stink to raise if the State Department puts a ktuba on display and it turns out the bride and groom are alive and want it.

I was part of the team that resued the archives in 2003. There are many books which do not have to be buried as they are in good condition. Something s wrong with this story

All you hear is the poor oppressed Palestinians. what about the Jew that were expelled, persecuted, robbed of their livelihood, and threatened, no one says anything, it is time to stand up and raise our voices.