Expulsion of Jews had 'no political consequences'

The Arab world has committed a terrible crime against its Jewish citizens, yet the international community has exacted no political price. "There have been no political consequences", as Gina Waldman puts it to the Canadian parliamentary committee investigating Jewish refugees this week. Instead, the tables are turned: Israel, which gave safe haven to the majority of these refugees - is in the dock: world-famous figures such as Professor Stephen Hawking have joined the Israel academic boycott - allowing themselves to be suckered by genocidal fascists and ethnic cleansers. 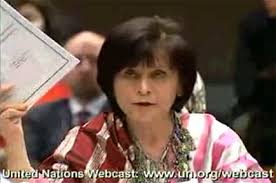 
VANCOUVER, Canada (JTA) -- Jewish refugees from Arab countries have been ignored by the Western world, the Canadian Parliament was told in its first-ever hearings on the issue.

"The expulsion of nearly 1 million Jews from nine Arab countries has had no political consequences," Gina Waldman, president of JIMENA, a nonprofit group dedicated to the preservation of Mizrahi and Sephardic culture, told the Canadian House of Commons Standing Committee on Foreign Affairs and International Development on Tuesday.

The hearings on Tuesday, as well as May 2, are part of a new push by Jewish groups and the Israeli government to highlight the plight of the refugees in the context of the Israeli-Palestinian conflict.

"The two refugee populations were created as a result of the Arab-Israeli conflict," David Koschitzky, the chair of the Centre for Israel and Jewish Affairs Chair, told the Jewish Voice. "Unfortunately, the plight of Jewish refugees has been completely omitted from Canada's Middle East policy, while that of the Palestinians features prominently."

According to JIMENA, the goal of the hearings is to urge the Canadian Parliament to pass legislation stating that a comprehensive Israeli-Palestinian peace agreement must deal with all issues relating to refugees, including Jewish refugees. The U.S. Congress passed similar legislation in 2008.

Last fall, Israel's then-deputy foreign minister, Daniel Ayalon, launched the "I am a Refugee" campaign in a bid to create parity between the struggle of Jewish and Palestinian refugees. Ayalon included publicizing the issue through Israel’s diplomatic missions.

According to information presented at the hearings, 856,000 Jews from Arab countries were displaced between 1948 and 1952, compared with 756,000 Palestinians.

On Tuesday 7 May, the committee heard testimony from Libyan-born Gina Waldman herself and two Jewish refugees from Iraq. One goes by the name of 'Chantal.' Here are Gina's and Chantal's stories:

Since you mention Prof Hawking, it is astounding how Hawking's alleged decision is seen. This man, whatever his merits, his intelligence, his knowledge, and so on, is in a pathetic state. He is dependent on others for all of his human needs. He is also dependent on others for information. He is not in a position to go about Israel freely and see whatever may be the truth of the claims of apartheid and horrid oppression of the Arabs now fashionably called "palestinians." He has to trust those around him who take care of his basic human needs, who keep him alive. So whatever he says about Israel-Arab relations or about the Iranian bomb or the abuse of women and girls in Pakistan or about animal rights and protecting the environment and so on, must be taken as the testimony of a man who is not capable of seeing for himself, of investigating independently, of a man who is totally dependent. Therefore, his info is only as trustworthy as his care-givers and info-suppliers are trustworthy. Assuming all good intentions on his part, he is not a reliable informant.

Further, mad charges of "apartheid" are made against Israel. Here is a description of the real apartheid, that in South Africa. It is horrid Communazi slander to accuse Israel of apartheid.
http://ziontruth.blogspot.co.il/2013/04/apartheid-in-south-africa-anything-like.html

Nathan Weinstock said it best, "it's not politically correct to point out atrocities committed by 3rd world countries."

Indeed, as your quote from Weinstock says. The Sudan killed millions of Black Africans starting from Sudanese independence in 1956 up to a few years ago. Almost nobody cared. Genocide was OK, apparently, for the EU too. When did the EU ever come out in criticism of Sudan's mass murder policies?
If the Arabs are notorious for a propensity to lie, the Europeans should be known for their leaning toward hypocrisy, especially if against Israel.