You don't need to be a Morccan Jew to celebrate the Mimouna - but it helps! Haaretz has a guide to the origins and significance of this most joyous and social of banquets, which concluded Passover week yesterday night in Israel and tonight in the diaspora.

For North African Jews, Passover's end is no time to unwind after a week of holiday celebrations. Instead, it is the signal for yet another holiday to begin: the Mimouna, which takes place on the night and day following the Festival of Freedom and this year fell on Monday night and Tuesday in Israel. (In the rest of the world, Tuesday is the last day of Passover.)

Mimouna events feature the hametz, or leaven, that was prohibited for the past week, and nowadays are probably best known for the mufleta and other culinary specialties laid out by Doram Gaunt in a 2010 food column in this paper:

"Jewish Israelis from Morocco and other parts of North Africa open their doors to all who are hungry, wish them prosperity and luck, and weigh down their tables with an unending abundance of jams, egg and almond pastries, dried fruit and marzipan, nuts and seeds, colorful cakes, couscous cooked in milk and all things sweet (mainly), washed down with sweet and spicy tea, plus arak. In order to satisfy the desire for bread after a week of repression, they rush to the store as the holiday ends, and stock up on kilos of flour, which they quickly turn into bread and rolls, doughnuts, pancakes they then dip in syrup, and in particular, the symbol of the holiday - the marvelous mufleta, made of layers of thin, oiled dough cooked quickly and skillfully on a skillet and devoured with butter and honey. All this promises joy and fertility, happiness, success and wealth, and the conclusive end of your diet."

The source of the holiday's name is sufficiently muddied that it has given rise to several alternate explanations. There is the connection with maimun, the Arabic word for "good fortune"; this is connected to a tradition that sees the day after Passover as a day of danger. Some say the name comes from Maimon – the father of Rabbi Moses Ben Maimon, known in English as Maimonides – and that the holiday marks the date of his death. And others tie Mimouna in with the Hebrew word for faith, emunah, and the belief that the Jewish people will be redeemed during the Hebrew month of Nissan.
But historian Yigal Bin-Nun, who studies Moroccan Jewry, argues that all these explanations are relatively late attempts to Judaicize what is essentially a pagan festival based on Moroccan folklore about a demon named Sidi Mimoun and his female equivalent, the part-goddess part-demon Lala Mimouna, or Lady Luck.

In an article called "On the earliest sources of Mimouna," Bin-Nun notes that the festivities traditionally entail a table laden with foods symbolizing abundance and feature the holiday greeting "Tarbakhu utsa'adu" ("May you have success and good luck") and, more significantly, a song whose words include "Lala Mimouna / mbarka masuda," meaning "Lady Mimouna / lucky and blessed." Bin-Nun writes that the holiday table is meant to convince Lady Luck to send along some good fortune.

Lala Mimouna and Sidi Mimoun figure prominently in many folkloric tales among Moroccan Muslims, have became part of the Jewish culture in Morocco and have lent their names to various towns in North Africa, writes Bin-Nun.

But in Israel, Mimouna has become not just an ethnic festival celebrated mostly by Moroccan Jews but also a place for politicians to see and be seen, eating mufleta and courting Moroccan voters. That makes it doubly politically incorrect to talk too much about what Bin-Nun describes as the roots of the holiday. 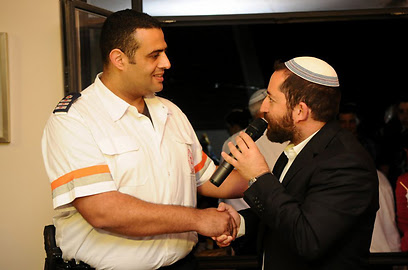 How Mimouna was celebrated in Israel:
'From matza and maror to muffleta and honey' (Jerusalem Post)
'We no longer bow our heads' - Bennett (Arutz 7)
Guest of honour: Arab paramedic who saved Adele (Ynet News)

In America:
Moroccan Mimouna for beginners (The Forward)

How Mimouna was celebrated in Morocco:
Noam Nir's Mimouna table in Essaouira
Posted by bataween at Tuesday, April 02, 2013