Passover, the festival of the Israelites' deliverance from slavery in Egypt, begins tomorrow night. Each Jewish community seems to have its own recipe for Passover haroset,  symbolising the mortar which the Israelite slaves used to make bricks. Iraqi Jews traditionally mix silan - or date syrup - with walnuts. But as Rachel Wahba discovered in the Times of Israel, western convenience stores have taken the hard labour out of the process of turning the dates into thick syrup.


In my grandmother’s time, making what we Iraqis call silan (see-lan), a syrup, made from dates, was a daylong labor of love. She cooked and stirred and squeezed the dates dry in cheesecloth for hours. I watched how the brown juice turned into thick syrup, silan! Iraqi dates deliver the thickest syrup. The mixture in the pot glistened. “It’s not ready till you see that shine,” she taught me.

When you mix finely ground walnuts with the silan (usually at around a 4:1 ratio of silan to nuts) to thicken the texture into a “mortar,” you have Iraqi haroset.

And now, this once laborious process has been dramatically changed by imported silan, found in any good Arab and Middle Eastern grocery store. An electric blender makes grinding down the walnuts much easier.

I have yet to meet one person who has not fallen in love with the taste and asked what was in it only to be shocked by the simplicity of this “mortar” for the bricks our people laid.

When it was my turn to carry on the tradition and turn the world on to Iraqi haroset, I found a can of silan in a Middle Eastern grocery store in San Francisco. Like, a Passover miracle, I felt like I had waded through the sea when I found silan, all ready, no cheesecloth, no sweating over a hot stove for hours. Same taste. No kidding, really it had the same home-made taste.

But the following year, Passover was coming and the store stopped carrying silan.

It just so happened that I was going to be in New York before Passover and I had heard about a particularly well-stocked Arab grocery store on Atlantic Avenue in Brooklyn. 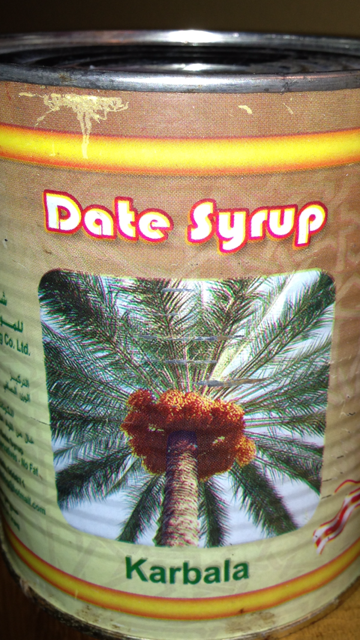 And there it was! My excitement was palpable. “How do you know about silan?” the shopkeeper asked. “My mother is from Baghdad, we know silan!” I told him.

Read article in full
Posted by bataween at Sunday, March 24, 2013

I've just got my Pesach silan. We eat it all year round but it tastes extra good for Pesach. With crushed walnuts mmmmmmmmmmm

I miss my nonna's Haroset!
What a delight. I love it spread out on iceberg salad!
Strange combination?
happy Pessah to you my friends
sultana