Sarah Honig: Not all refugees are created equal 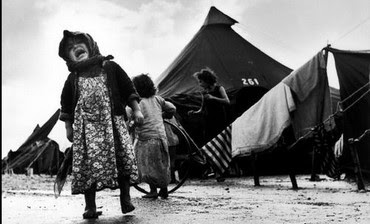 Robert Capa's famous photo of a Jewish refugee from an Arab country in the Shaar Ha'aliya camp near Haifa, c.1951

Not all refugees are created equal, Sarah Honig writes in the Jerusalem Post - the Palestinian refugees are the world's darlings, while the story of the Jewish refugees from Arab lands has been erased and falsified.  Even this image of a Jewish refugee girl taken in a tent camp or ma'abara in Israel was promptly hijacked by Arab propaganda and falsely hyped into a Palestinian Arab poster child.


(...) The Palestinians have always postured as the Jewish state’s victims, even if it was they who had attacked Israel. They were rendered refugees in a conflict of their own instigation, launched with the boastfully broadcast intention to “throw all the Jews into the sea” – i.e. perpetrate genocide and ethnic cleansing. Nonetheless, a mere four years after the Holocaust (which the Arabs collaborated in and cheered) the UN could pass up no opportunity to single out the Jewish state for blame.

Given this mindset, no special succor was dispensed to Jewish refugees. The Brits chased them on the open seas to prevent their rickety “illegal” boats from reaching the Jewish homeland. Those caught were incarcerated in forbidding camps, under shocking conditions, after having just emerged from the Nazi nightmare.

Things were no better in Europe’s Displaced Persons camps, where Jews resided “legally.” Bombastic American Gen. George Patton regarded exiled and traumatized Holocaust survivors as sinister scum. He confined the Jews in DP camps under his command, within barbed-wire enclosures, in stark contrast to his treatment of German civilians – admiration for whom he never bothered to hide.

Jewish refugees from the Middle East – who outnumbered the Palestinian refugees, who had resided in the various currently Arab countries long before the first Arab appeared on their soil, who didn’t launch wars against anyone, who left behind far greater property than Palestinians ever had, who were terrorized and robbed in full view of the uncaring international community – were never even counted as refugees. To this day world opinion adamantly refuses to concede that an exchange of populations had taken place here.

Facts will never be allowed to interfere with popular prejudice – not so long as any refugee episode can be linked to some Jewish aspect or another.

There’s no end to the shameless perversion of truth. Soon after Israel’s independence, the young, embattled country was covered with tent cities full of refugees, many of them from Arab countries. In early 1950, legendary photographer Robert Capa captured the image of a tiny weeping girl in Haifa’s Sha’ar Ha’aliya transit camp.

In no time, the Arab propaganda machine hijacked the evocative image, falsely hyping it as that of a pint-sized Palestinian refugee crying her heart out. She became an instant poster child among self-professed humanitarians.

Nobody cared that she was, in fact, a Jewish refugee crying her heart out. The corrected caption put the picture out of mind. As we said – not all refugees are created equal.

Read article in full
Posted by bataween at Sunday, February 24, 2013

Sorry but I do not like that 4th paragraph
; you or the person who wrote this seem to forget that Americans saved us!
A French song says:
Si ça n'était pas pour les Ricains, nous serions tous en Germany.
sultana