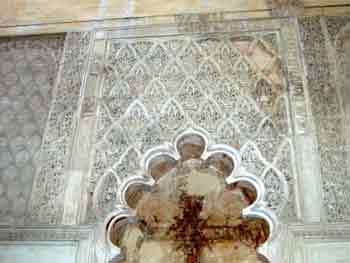 The synagogue of El Transito in Toledo, Spain


An American member of Congress is among 6, 000 descendants of Jews forced out by the Spanish inquisition who have contacted the authorities about acquiring Spanish nationality.  Report in The World:


Today in Spain there are only some 40,000 Jews. The head of the Spanish Federation of Jewish Communities told Spanish TV that the new offer of immediate citizenship for descendants had created a buzz in Jewish communities around the world.

“I can tell you that in less than a month we have received about 6,000 inquiries, among which I would highlight one from an American member of Congress,” he said.

A spokeswoman for the Federation could not say who that Congressman was. But one American who has looked into the possibility of becoming Spanish is Doreen Carvajal, a reporter with the New York Times in Paris.

Some years ago she learned she had Sephardic Jewish roots. She began to investigate, even moved to Spain and wrote a book about her experience, called “The Forgetting River.”

“My initial reaction was that it was a really thrilling moment,” Carvajal said. “That it was an act of justice. They held this news conference with top ministers to offer automatic citizenship to descendents of all Sephardic Jews who left during inquisition. Point blank done. 363 It was a romantic notion on my part. I told my husband, I think I’m going to try and get the passport because it closes a circle. It was very poetic,” Carvajal said.

But Carvajal says that when she contacted Spain’s Jewish Federation, she learned she didn’t qualify. Not yet anyway.

Part of Carvajal’s family was Sephardic Jew. But when they left Spain for Costa Rica, they converted to Catholicism, at least officially, out of fear of Spanish Inquisitors. The Inquisition hunted down and persecuted Jews even in the far-off Spanish colonies.

So, Carvajal is technically the descendant of converts or, conversos. She’s not a practising Jew herself. She says she was told she’d have to convert to become Spanish.

“I felt like another it was act of being forced,” she said. “Here are the these people, the descendants of the anousim, the forced ones, the conversos, being told you have to do this, you have to be a certain religion? So what happens if you’re a secular Jew? It was a bittersweet moment for me when I realized there were a lot of clauses there and it really wasn’t an automatic offer for everyone.”
Isaac Querub, the president of Spain’s Jewish Federation, did not respond to multiple requests for interviews. Nor has Spain’s Justice Ministry commented on why some descendants are excluded from the citizenship offer.

Carvajal says she’s been left to wonder whether Spain just wants to attract Jewish wealth, from known Sephardic enclaves that have survived in place like Venezuela and Turkey.
Maria Josep Estanyol, an historian on Jews at the University of Barcelona, says she’s not sure why Spain is splitting hairs now. But she says it is well known that when Spain expelled the Jews in 1492 it had disastrous effect on the economy.

The dictator,Francisco Franco [Franco is also a Jewish name], is credited with saving some Sefardic Jews from the Holocaust. But he did this only after he could see that the Germans were losing the war. I would not overrate his kindness towards Jews.

Why would they want to? Spainish citizens freely admit they are some of the most antisemitic people in Europe.

My thought on this matter are surely against that. i remember Franco as a partner of Nazism and if you want to think about it there was a civil war in Spain. A lot of people died. Ernest Hemingway wrote a FAREWELL TO ARMS and even participated in that war!
Personally I would not want to mive in such a Catholic country. But that is my personal opinion!!!
PS The actual Queen's mother, (Frederica not to name her) was a great friend of Hitler

Please excuse my mistake concerning the film on the Spanish Civilwar, you will have corrected this mistake:
It's of course FOR WHO THE BELLS TOLL with Gary Cooper and Ingrid Bergman.
'ask not for who the bells toll for it may toll for you'
sultana

Sultana, of course Franco was helped to win the Spanish civil war by hitler and mussolini. He also sent troops [La Division Azul] to fight for the Germans on the Eastern Front. In 1940 [or approx] he sent his troops into Tangiers, up to then an international zone. Thus he ruled both Tangiers and the Spanish zone of Morocco, and in this capacity he encouraged Arab nationalism, especially against the French, and prevented Jewish youth from leaving to join the Allies.

But the perfect opportunist that he was, when he saw the Germans losing the war [1943], he helped some Jews escape being sent to Auschwitz, and helped Jews in other ways.

Just as interesting is that starting at the end of WW2, he took a big interest in helping Arab nationalists, selling weapons to the Palestinian Arabs for the 1948 war, sending observers to one of the first meetings of the Arab League [itself a British-sponsored institution], and giving sanctuary to German and Vichy French war criminals. Nasser once visited Franco in Madrid.

some corrections to my comment on Franco.
During the civil war in Spain, he used Moorish/Moroccan troops against his own people. And they were effective and feared combat force. Recall the Spanish civil war song Ay Manuela with its line "Lucharon contra los moros" [they struggled against the Moors].
During the civil war and WW2, Franco allowed German agents to propagandize among the Arabs in the Spanish zone of Morocco and later in Tangiers after Spain had occupied it. There were a number of Moroccans in the Spanish zone who were Arab nationalists and collaborators/agents of/ the Germans. One bore the curious name Abdel-Khalek [Abdel-Khaled?] Torres, which may indicate an ultimate Spanish origin of his family. Note again that leading Arab nationalists in the Spanish zone collaborated with the Nazis.