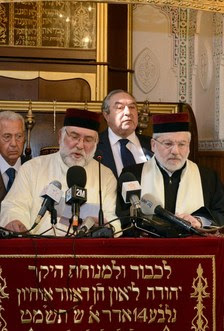 Two rabbis at the ceremony marking the restoration of the Fez synagogue.

King Mohammed hailed the "spiritual wealth and diversity" of Morocco at a ceremony on Wednesday to mark the end of the restoration of a 17th century synagogue in the city of Fez, reports AFP in the Lebanese Naharnet. Forgive my cynicism, but the only value in restoring synagogues without communities is that it is good PR. In this case, the Moroccan government did not even have to pay the full cost: Germany part-financed the restoration work.

The ceremony was held in the medina, the Old City, of Fez, a UNESCO world heritage site, before more than 200 people including the country's Islamist prime minister and German parliament speaker Norbert Lammert.

The two-year restoration of Slat Alfassiyine synagogue bore "eloquent testimony to the spiritual wealth and diversity of the Kingdom of Morocco and its heritage," Mohammed said in a message read by Prime Minister Abdelilah Benkirane.

"The secular traditions of Moroccan civilization drew their essence from the fact that Moroccans are deeply ingrained with the values of coexistence, tolerance and harmony between the different components of the nation," the king said.

The new constitution adopted in 2011 against the background of the Arab Spring, recognized its Jewish heritage as part of Morocco's national identity, he said, calling for the renovation of all Jewish place of worship in the country. (...)

This JTA report on the same ceremony does not mince its words on the causes of the Moroccan exodus:

"Spurred on by a succession of pogroms, including in Oujada and Jerada, some 250,000 Moroccan Jews left the North African country between 1948 and 1967. Many settled in Israel. In 1959, Zionism was outlawed in Morocco and defined as a “serious crime.” Morocco ended that official animosity in the late 1980s and has maintained ties with Israel since then. Today, some 3,000 Jews live in Morocco, according to the European Jewish Congress. "
Posted by bataween at Friday, February 15, 2013

Maybe we should teach the King of Morocco , commander of the faithful, the definition of the word "Knesset" a place gathering, an assembly
A Knesset without prayers, without singings without soul is not a knesset but a cimetery or an empty building , a useless building.