Jew is beaten up in Yemen 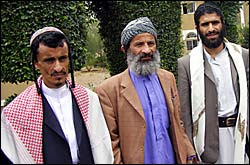 A Jew is in serious condition after being beaten up in Raida, Amran province, Israel Hayom reports. The 100 harassed Jews in the area are waiting to sell their houses before leaving. Two Jews have been murdered in Yemen in the last five years. (With thanks: Lily)

Members of the Jewish community in the central Yemeni town of Rada'a, south (north - ed) of the capital Sanaa, claimed on Wednesday that town resident Joseph Re'ati was beaten in an anti-Semitic attack. He was hospitalized in serious condition.

Jews in Yemen are ostensibly protected by the government, but in reality their situation has not improved. After becoming targets for attacks by Islamist elements, many Yemeni Jews have chosen to leave their homeland in recent years.

Largely impoverished, Yemen has maintained a tenuous stability for some time, though the country has seen violence soar since protesters inspired by the Arab Spring took to the streets in Jan. 2011. The uprising led to the ousting of dogged Yemeni President Ali Abdullah Saleh.

I am very sorry for those Jewish Yemenites.They prefer hanging on to the stones of their homes rather than leave to safety!
sultana latifa

Everywhere jews are having problems they cant leave peacefully even in norway. Muslim extremists are causing probelms against the jews in many countries where jews used to live safely even some years ago. In india Muslim extremist killed innocent 11 jews and mutilated their genitals.
see this link http://www.iufe.org/2013/02/how-were-jews-tortured-in-concentration.html