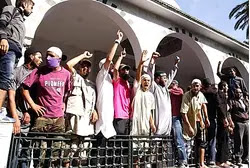 Israeli officials have expressed serious concerns over the safety of the Jewish community in Tunisia, Arutz Sheva reports. Has Tunisia reached the point of no return?

Some 2,000 Jews still live in the country, and the Foreign Ministry's office for fighting anti-Semitism said that instability in the country could have serious negative effects on the country's Jews.


The recent murder of leftist opposition leader Chokri Belaid has brought hundreds of thousands of angry Tunisians out into the streets, as popular opposition to the country's Islamist regime grows.  The unrest (...) could be a recipe for attacks on Jews, the Foreign Ministry said.

Public declarations of anti-Semitism, in social media and traditional media, have risen significantly in recent days, the Ministry said. In addition, local imams in mosques have been inciting against Jews, claiming that they are responsible for the liberal opposition to the Islamist Ennahda party, which runs the country.

Several Jewish cemeteries in Tunisia were desecrated this past week, local residents reported. Many residents are living behind locked doors out of fear that pogroms could evolve.

The Foreign Ministry has instructed Israeli diplomats around the world to ask the governments of the countries where they are stationed to intervene with the Tunisian government to ensure the safety of the country's Jews.

Read article in full
Posted by bataween at Friday, February 15, 2013

"Certification: We hereby certify that Elyakim Bokhor Eliyahu has received an order of expulsion emanating from the Egyptian authorities to leave the Egyptian territory in a period of 7 (seven) days starting from 27/11/1956"

That was not unique. But not many kept that paper, so it's a rariity and should be kept preciously for proof. There will come a day when this too will be denied just as some deny the Haulocost
Sultana