'Egyptians are being lied to on Israel' 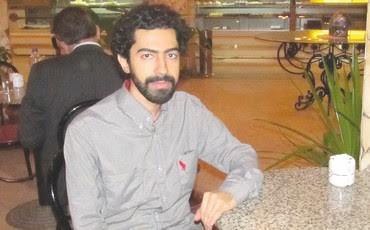 Following the efforts of Maikel Nabil Saad, another brave pacifist in Egypt is trying to improve ties with Israel.  The Jerusalem Post reports: (with thanks: Lily)

One small group of activists, however, is not ignoring the Israel issue. No to Compulsory Military Service is a pacifist group started by Maikel Nabil Sanaad in 2009 aimed at encouraging Egyptians to exercise their right to refuse to serve while promoting the value of pacifism.

Emad el Dafrawi is one of the central activists in the No to Compulsory Military Service and an avowed pacifist.

For el Dafrawi, pacifism means advocating for peace with all countries – including Israel.
“If there was no conflict and no wars between Egypt and Israel, I believe that we would have been closer to democracy,” el Dafrawi said in downtown Cairo, days after the second anniversary of the January 25 Revolution.

“This is an issue that they always use to try to distract people’s attention from the internal issues or real issues that affect them.”

El Dafrawi, 25, grew up in a Muslim home and was apolitical as a teenager. But when he studied mass communications at university, he started reading international news as a way to improve his English and check the bias of the state media.

“Normal Egyptians don’t hate Jews or Israelis. And if they do it is because of propaganda of the media, because they were taught that Israel...shouldn’t exist.”

Read article in full
Posted by bataween at Sunday, February 03, 2013

And whether the Egyptians like it or not, we shall overcome
sultana