Egyptian paper ties itself up in antisemitic knots 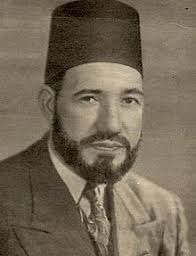 
"We're not antisemitic, only anti-Zionist!" argues a columnist in the Egyptian newspaper Al-Mesryoon. Using the worst Nazi tropes (Jews in Egypt were all-controlling, not just influential) he then proceeds to tie himself up in knots. The excellent Elder of Ziyon does a good 'fisking' (with thanks: Lily):

Al Mesryoon, a major Egyptian newspaper, has an article saying that the Muslim Brotherhood and its founder, Hassan al-Banna, were not anti-semitic but only anti-Zionist.

The author, Sawfat Hussein, brings proof from testimony that al-Banna gave towards the Anglo American Inquiry on Palestine in 1946, where he said that Islam had no problem with Jews, but only with Jewish immigration to Palestine.

Hussein then goes on to describe why the Brotherhood was against the Jews - of Egypt. The reason?

Well, we need to understand the context. 98% of those in the Egyptian Stock Exchange were Jewish. One third of the major industries in Egypt were owned by Jews.

Jews were also over-represented in the political sphere compared to their actual numbers.

And- get this - Jews in Egypt celebrated the Balfour Declaration!

Putting the facts together, you see that Egyptian Jews were of course a danger to Egypt and had to be fought against, and Hassan al-Banna was merely defending his country by issuing statements that might, on the surface, appear anti-semitic.

For example, Hussein notes, al-Banna published a pamphlet called "The risk of Jews in Egypt," where he warned of the Jewish domination of the economy, gold, major hotels and real estate, and their control of advertising and newspapers.

See? this is all perfectly understandable! No anti-semitism there!

In a 1938 pamphlet, al-Banna wrote that Jews of Egypt who enjoy wealth and prosperity and that while Muslims and Copts have held meetings and conferences supporting Palestinian Arabs the Jews did not. "Show me a Jew who attended a meeting or contributed to an [Arab]Palestine conference. Show me a Jew who marched in a demonstration or protested against the criminal acts in Palestine. Show me a a Jew who collected money or sent a donation to the mujahideen Arabs in Palestine," he wrote.

In 1947, al-Banna wrote a letter to a leading rabbi in Egypt, where he noted that the Egyptian government had pledged to protect Jews from rioters and protesters. Al-Banna said that he would love to believe that all Egyptian citizens were equal, but in fact "now we're in front of an international Zionist conspiracy to uproot Palestine from the body of the Arab nation...." and he threatened the Jewish community if they do not publicly support the Muslims of Palestine with their wealth and media.

Hussein says that it is eminently reasonable that anything less than full-fledged support by all Jews of the people who wanted to throw their co-religionists into the sea would be regarded as treasonous. But this isn't anti-semitism!

Antisemitism is central to Brotherhood ideology
Posted by bataween at Wednesday, February 06, 2013

You've got to be kidding: " 98% of those in the Egyptian Stock Exchange were Jewish. One third of the major industries in Egypt were owned by Jews."

That's incredible. Egyptians ought to be on their knees thanking Jews. After all, with those kinds of numbers, Arabs are - well - good for nothing!

Except that it's all lies! The Jews were influential - but not to that extent...