After the Jews, Libya is now turning on Christians 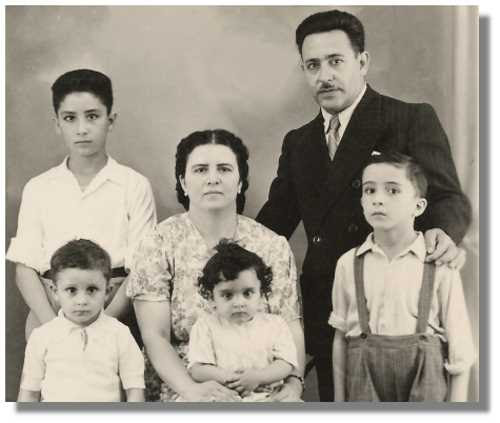 A Jewish family in Libya (from The Last Jews of Libya, copyright Vivienne Roumani-Denn, used with permission.)


Recent news that the new Libyan government has arrested four foreign nationals on charges that they were proselytizing Christianity in Libya has been troubling Gina Waldman, of JIMENA, writing in the Times of Israel. It is reviving memories of her own expulsion in 1967:
Sadly, the story of the Swedish-American, Egyptian, South African and South Korean who were arrested for printing and distributing bible pamphlets in Benghazi by a unit of the Libyan Defense Ministry known as Preventative Security, brings back sad memories.

Even though Libya had a revolution, the country still maintains an archaic law from the era of the regime of “El Rais,” Moammar Gadaffi, which makes proselytizing any religion, other than Islam, a criminal offense punishable by death. One oppressive dictatorship has fallen but another one has replaced it. Libya continues to deny its citizens the freedom to worship in the religion of their choice.
I was born in Libya, but left the country as a 19-year-old in 1967. I loved my country, the food, culture and traditions of our people who had a history in Libya for more than two thousand years. But I left when mobs were roaming the streets, not chanting for democracy or yearning for freedom but calling for the heads of Jews. Violent political culture has often been part of Libyan society, especially towards its Jewish community. I suffered as a member of Libya’s Jewish minority just as Christians suffer for being a minority in Libya now.

After WWII, Arab nationalism spread throughout the Middle East and North Africa, leading to riots which often turned into violence directed at the Jewish communities. In 1945, more than 140 Jews were killed and many injured in a pogrom in Tripoli called the “Mora’ot.” The film: “The Forgotten Refugees” highlights these events.

My mother, Laura, escaped attacks on our house by jumping from rooftop to rooftop until she was rescued by a Christian woman. After the riots, my father helped bury the severed bodies of his friends; an experience that traumatized him for the rest of his life.

When Israel became a state in 1948, anti-Jewish riots escalated, synagogues were torched and Jewish homes were destroyed. This resulted in the mass expulsion of 30,000 Jews to Europe and Israel. By 1950, only 6,000 Jews were left from what was once a thriving Jewish community. I was one of those Jews. Today there is not a single Jew left in Libya.

While living in Libya my family and I, like the rest of the Jewish Community became prisoners in our own country. Jews were prohibited from leaving the country, holding citizenship, travel outside of Tripoli, holding government jobs or attending government schools. I was stripped of my basic human rights and treated as a Dhimmi, a subjugated, second class citizen, for my religious beliefs. Although I was raised in an orthodox Jewish home, I had no other choice but to attend Catholic school. I could recite prayers in Latin, but I was not even allowed to learn Hebrew, the religious language of my people.

My father had invested heavily in Libya. He had a business and a family. We always prayed that things would get better, but we were living in denial. The situation for Jews in Libya worsened. By 1967 during the six-day-war between Israel and its five Arab neighbors, mobs took to the streets burning Jewish homes. I became separated from my family and was hidden in the home of a Christian family.

By order of the Libyan Government, my family was expelled; all of our assets were confiscated. We were allowed one suitcase and the equivalent of $20 to take with us outside of the country. Fleeing for our lives, my family narrowly escaped death when the bus driver attempted to burn the bus taking us to the airport. We were rescued by Christians.

Today Libya is Judenrhein, Jew free, and recent events show it will soon be Christian-rhein. The Libyan government must find some enemy to justify the police state that rules over the Libyan people. “Proselytizing is forbidden in Libya. We are a 100% Muslim country and this kind of action affects our national security,” a security official named Hussein Bin Hmeid told Reuters in justifying the arrests of the Christians.

Does it surprise officials of Western governments that intolerant societies like my native Libya could produce so many who are willing to murder in the name of religion?

1897: In correspondence bearing today's date, “leading members of the Jewish community in Tripoli sent a letter to the President of the Alliance that gave a grim picture of Jewish life in rural Tripolitania."  The Jews reported that they were living as “dhimmi.” An Arab mob had destroyed the synagogue in the village of Zliten and in another village the authorities refused to find those who had murdered one Jew and injured his companion.

My oh My! We Jews seem to raise hate wherever we are! And why is that? No one can answer that question.
When Cairo burned and we went to our rooftop, it was our BAWAB, porter, who saved us. He stood in front of the mob and said "THERE ARE NO JEWS HERE!
That picture was beautiful. Thanks for that
sultana