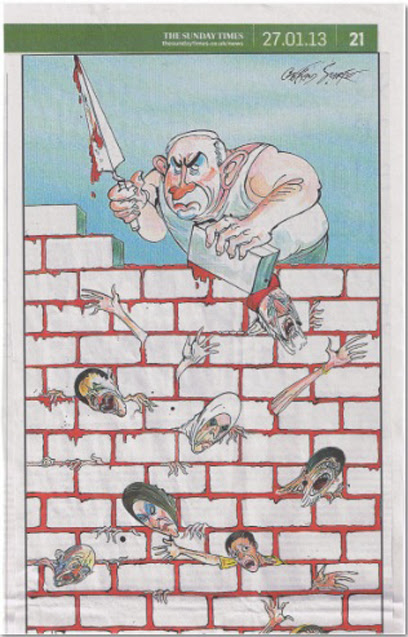 Two events shook Jews the world over, on or around Holocaust Memorial Day:  One, the pronouncements of a British MP, David Ward, accusing the Israelis of failing to learn the lesson of the Holocaust by 'committing atrocities against the Palestinians'. The other was an antisemitic cartoon (above) in the Sunday Times by the controversial Gerald Scarfe showing Benjamin Netanyahu building a wall with the blood of crushed Palestinians. But for all the furore and the condemnations,  critics have been guilty of moral inversion, failing to see in Palestinian and Arab exterminationist intentions the legacy of a pro-Nazi past.

*Take Matt Hill, who rightly condemned David Ward in his Telegraph Blog. But he also had harsh words for 'paranoid' Israelis: " (to use Amos Oz's words) half-hysterical refugees and survivors, haunted by dreadful nightmares”, "who see in the Arabs a reflection of their former oppressors."

But the Arabs are their former oppressors, not a reflection thereof, Matt!  The Palestinian Mufti of Jerusalem was an active collaborator in Hitler's Holocaust, and was responsible for causing the deaths of tens of thousands of Jews in Europe. In the Middle East too, he incited riots in Palestine and Iraq which cost hundreds of Jewish lives. He had a plan to deport Iraqi Jews to camps in the desert and planned death camps for the Jews of Palestine near Nablus. After the war, the Arab states colluded in Nuremberg-style laws to engineer the  ethnic cleansing of their Jews.

Many of today's Palestinians nurse the same genocidal intentions as the Mufti, try as they might to cloak their aims in language acceptable to western ears. Just read the Hamas charter. The difference between then and now, is that today's Jews have the means to defend themselves.

*In response to a commenter to this Times article who thought there was 'peaceful coexistence' in Palestine before the establishment of Israel, L. Amior pointed out that the Mufti of Jerusalem broke the peace with riot after riot: "after inciting one riot too many against the British Mandatory forces, he escaped in 1937 to evade an arrest warrant. He went to Iraq, where he incited a pogrom against Jews in 1941, in which 180 were slaughtered. He then went to Berlin, where he actively collaborated with the Nazis, and helped create an SS division of Bosnian Muslims to fight for Hitler.

"Here they are, having a fine time together.

*Such Jew-hatred is deep and all-pervasive in the Arab and Muslim world, suggests Hirsan Ayaan Ali in the Christian Science Monitor. "Millions of Muslims have been conditioned to regard Jews not only as the enemies of Palestine but as the enemies of all Muslims, of God, and of all humanity", she writes. "In the wake of the Arab Spring, as the people take a chance on democracy, they and their new leadership want to see their ideals turned into policy."

That's why the West needs to take seriously Arab and Muslim anti-Jewish hatred and incitement, such as that of President ('Jews-are-apes-and-pigs') Morsi, and condemn it in the strongest terms.

*In her blog post on the David Ward scandal, Melanie Philips hits the nail on the head:

"... the really terrible thing here is not the grotesque misuse of the Holocaust, nor the vicious suggestion that ‘the Jews’ are guilty of behaviour that is somehow analogous to the Nazi genocide inflicted upon them, nor even the sickening insult that they have to ‘learn the lessons’ of their own suffering.

"No, the true venom of these remarks is the way they reverse the position of today’s Jewish victims – the Israeli survivors of the Holocaust and their children and grandchildren -- and their current would-be exterminators – the descendants of Hitler’s Nazi collaborators in Palestine during the Holocaust.

"For the fact is that Israel is not trying to exterminate the Palestinians – indeed how could this possibly be the case, since the Palestinian population has more than quadrupled since the rebirth of Israel in 1948. Nor are the Israelis oppressing the Palestinians, who have benefited from some of the highest rises in GDP and lowest child mortality ratios in the Middle East."