Looking for the Moroccan-Jewish hits of yesteryear 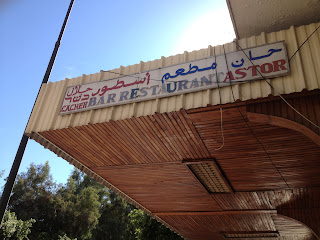 The Astor: the last Kosher restaurant in Fez

Chris Silver is a man on a musical mission - to find the stars of 1940s and 50s popular music in the dusty record shops of Morocco. Read his Jewish Morocco blog (with thanks: Michelle):

Some three years after first discovering the magic of musician Haim Botbol in a record store in Casablanca, I returned to Morocco to find his music in cassette stalls across the country. In fact, I got an even deeper sense of the critical importance of music in the Maghreb on this trip. In Tafraoute, in the country’s deep southwest, frescos of musical instruments like the rebab and images of musical standouts from the 1940s like Hadj Belaid adorned walls throughout the region’s ancient villages.

At a pizza joint along the Tizi-n-Tichka pass, a banjo on a chair was displayed prominently. When the restaurant’s owner wasn’t making pies, he would strum a few chaabi notes. And in Casablanca, by the former Lincoln Hotel, a cd seller played Samy Elmaghribi’s version of Gheniet Bensoussan for passersby.

After years of collecting Moroccan and then North African music in general, I was interested in not only finding dusty recordings from Tangier to Fez but also to collect musical memories. I was interested in how Moroccans, Jews and Muslims, understood and remembered their Jewish pop icons of yesteryear and so I went looking.

I started in Tangier and found very little. I figured a Mediterranean port city with a once large Jewish community would herald in an auspicious beginning.

Read post in full
Posted by bataween at Thursday, December 06, 2012