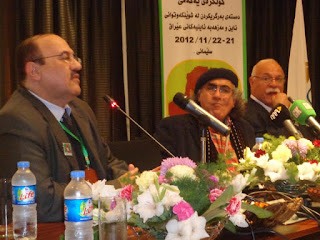 An Iraqi Muslim has taken on himself the task of speaking for Iraqi Jews after attending a November conference in the Kurdish city of Suleimaniya which assembled all religions and sects except the Jews.

Despite initial attempts to silence him, Nabil al-Hadairi, a writer, received a standing ovation when he addressed the conference, which included ministers and international media. He spoke about Iraqi-Jewish rights in history dating back to Babylonian times 3000 years ago.

Nabil al-Hadairi managed to write three articles of the Conference communique, stating the importance of correcting the Constitution by recognising Judaism as an official religion alongside Islam, Christianity and others.

He rallied support from President Jalal Talabani and the president of Iraqi-Kurdistan, Masood Barazani, to legislate a law of citizenship in Iraq to enable the Jews to regain Iraqi nationality and reward them with parliamentary seats proportional to their actual size.

Al-Hadairi also wrote a clause recognizing the rights of Jews to Iraqi nationality and including the right of Iraqi Jews to return. Another clause recognises the crime of displacement and its effects as well as the need to maintain and not tamper with Iraq's Jewish heritage.

" I noticed that no one was available to represent (the Jews) or mention this sensitive subject, therefore, in order to balance the debate I decided it is going to be my discussion subject and my solemn duty to repay some of their debt in rebuilding Iraq," he says. "I found it surprising that there was not a single representative of Iraqi Jews and their glorious history which was full of great accomplishments for the glory of Iraq and its constitutions, not to mention the calamity of withdrawing their nationality, money, rights, imprisonment and ethnic cleansing by forced migration of the best of my Iraqi Jewish friends."

The conference of religions and sects took place at the initiative of Jalal Talabani, the president of Iraq. It was the first ever such conference since the fall of Saddam Hussein. Christians, Muslims (Sunna and Shia), Yazidis, and even Baha'is sent representatives. There are believed to be six, or fewer, Jews still living in Iraq.

OT
I´m very sorry for this, but it´s hard to find anything else related to the mashhadi jews in Israel:
http://www.haaretz.co.il/gallery/women-s-day/1.1658677

this is an article advocating for the Jewish refugees from Arab countries by Michael Curtis, a respected political scientist in the USA.