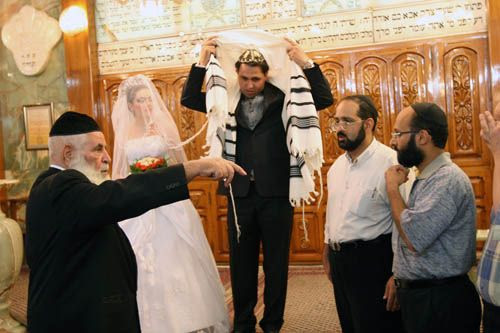 A Jewish wedding in Iran

Iran has apparently passed a new law whereby an Iranian Jew who visits Israel and returns to Iran may be sentenced to five years' in jail.

The French-Jewish publication Information Juive (November 2012) quotes a report in Israel Hayom, in which Mr Pinchasi, a new arrival in Israel, mentions the new law.

Jews usually travel to Israel via Turkey. There are still direct phone links between Iran and Israel, but Jews suspect their calls are tapped.

Mr Pinchasi says that Jews are free to practise their religion in Iran, even if they do not walk the streets wearing a kippa.

There are believed to be some 180, 000 Jews of Persian origin living in Israel. According to official census figures, there are fewer than 9, 000 Jews still in Iran, but Iranian Jews in Israel and the US still talk of 25, 000.

The interview with Mr Pinchasi took place before the murder last month of a Jewish woman in Isfahan.

To the revenant who still live in Iran, there's no hope for them. They were given endless opportunities to leave. It's too late. In another few years Iran will outlaw Judaism. And call for however many pogroms and 'zionist spy trials' are needed to ethnically cleanse the rest.