How Algeria lost its Jews

This year marks the 50th anniversary of the exodus of the Jews of Algeria. The exhibition at the Jewish Museum in Paris has been attracting wide interest into this neglected aspect of French, Jewish and Algerian history. Lyn Julius blogs in the Times of Israel:

Meanwhile dubious parallels are drawn in academia and the media between France’s colonial war in Algeria, and Israel’s war with the Arabs. Propagandists claim that Algeria’s Jews cast their lot with France in a supposed betrayal of Algeria’s Arabs. The ‘colonised’ Arabs of Palestine will triumph just as surely as they did in Algeria, they confidently predict.

But far from being colonial, Jewish roots go back 2,700 years when Jewish traders arrived in North Africa with the Phoenicians, 1,000 years before Islam; and the first Jewish slaves and expellees from Judea settled among the Berbers soon after the destruction of the 2nd Temple. Some Berber tribes were said to have converted to Judaism. The most famous Jewish Berber of all, the warrior Queen Kahina, fought the Arab Muslim invaders in the 7th century – in vain.

The toshavim, the settled indigenous Jews who managed to survive islamisation, were joined in the 15th century by the megorashim, Jews escaping the Spanish Inquisition. Under Ottoman rule, most Jews lived in abject misery as dhimmis – inferior subjects under Islam. One 19th century traveller, Signor Pananti, wrote: “there is no species of outrage or vexation to which they are not exposed…the indolent Moor, with a pipe in his mouth and his legs crossed, calls any Jew who is passing, and makes him perform the offices of a servant…. Even fountains were happier, at least they were allowed to murmur.”

No wonder then, when Algeria became part of metropolitan France in 1830, the oppressed Jews greeted the French as saviours and liberators. Forty years later the Decret Cremieux, named after a famous Jewish politician and philanthropist, imposed French nationality on the entire Jewish community.

The myth has since developed that only the Jews were offered French nationality. The Muslims were offered it too, but overwhelmingly rejected it, as it would mean compromising their personal status, which was governed by Muslim law. In Muslim eyes, the fact that the dhimmi Jews could have greater rights than they did caused great resentment. But the Jews were also resented by the pieds noirs. How dare these natives be given the privilege of French nationality and suppose themselves equal to true Frenchmen?

The Jews found themselves between a rock and a hard place. Muslim antisemitism reached its peak with the eruption of the Constantine pogrom of 1934, in which 25 Jews were killed. French antisemitism reached its zenith with the WW2 abrogation of the Decret Cremieux. Under Vichy rule, Jews not only were stripped of their French nationality, but were sacked from public service jobs and subject to quotas and restrictions. The Decret Cremieux was reinstated in 1943. In some Jews, the trauma of having their French citizens’ rights taken away created an absolute dread of being identified with Arabs: they were Frenchmen of the Jewish faith – francais israelites.

But as the Arabs embarked on an ever more brutal campaign of decolonisation in the 1950s, while the pieds noirs engaged in equally brutal counter-terror, the Jewish community was careful to maintain an official position of neutrality – although in retrospect, the killing of rabbis and bombings of synagogues looked deliberate enough. Some Jews supported the FLN independence fighters. A minority of anti-French Jewish communists earned the title ‘pieds rouges‘.

The Jews could sit on the fence no longer when two events forced them decisively into the French camp: the first was the burning of the Great synagogue in Algiers in December 1960. Arabs went on the rampage ripping memorial plaques from the walls, and torching books and Torah scrolls. The second was the murder in June 1961, while he was out shopping in the market, of the famous Jewish musician, Sheikh Raymond Leyris, a symbol of a shared Arab-Jewish culture and father-in-law of the singer Enrico Macias.

Like the pieds noirs, the Jews were faced with a stark choice: suitcase or coffin. They scrambled to reach seaports and airports. By the time Algeria had declared independence on 3 July 1962, all but a few thousand Jews had left for France. The watchword was now ‘Muslim Algeria’, not ‘Algeria for the Algerians’. No ‘foreigner’, even those who had fought for the FLN, was awarded Algerian nationality, unless they had a Muslim father. There was no place for Jews in the new Algeria, as there is no place for Jews anywhere in the Arab world.

‘Juifs d’Algerie’ is on at the Musee d’Art et d’Histoire du Judaisme in Paris until 27 January 2013. 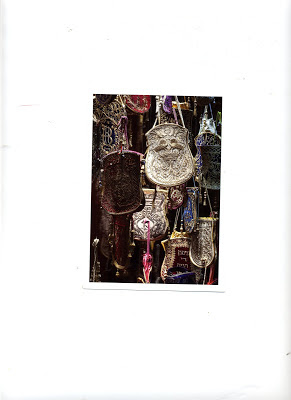 Distinctive bags customarily given to Barmitvah boys in Algeria are almost the only vestiges left of Jewish life
Posted by bataween at Friday, December 21, 2012

Algerian Jews are (were) very gifted people.
That Utube was very interesting.That's what happens when non Jews are jealouus of you. They will not stop until they put you down lower than carpets.
sultana

It's a conference in French on Akadem :


Fifty years ago, the exodus from Algeria
20 Centuries of Jewish Life (155 min)

every algerian know that were living perfect life with us then they betrayed us to please the french and i dont know why u lot dont want to admit that, but the only true jews how stayed in algeria are the ones who were not traitors. the algerian jews how live in france they consider them self as french not algerians for me that is enough that they dont want to belong to our country.