Arabs lay claim to tomb of Simon the High Priest 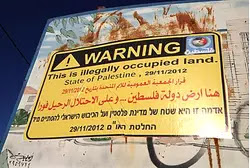 Is it a coincidence, or have the opponents of a Jewish presence in 'Arab East Jerusalem' deliberately chosen this festival of Hanucah to lay claim to the tomb of Shimon Hatzaddik, the grandfather of the Maccabees? A bad move, in my opinion - for if anything confirms the ancient presence of Jews in Jerusalem, it is holy sites such as this.

Arab and leftist anarchists were apparently busy overnight Saturday in Jerusalem's Shimon Hatzaddik neighborhood, posting signs and placards calling for Jews to be expelled from their homes. One of the signs was placed at the entrance of the tomb of Shimon Hatzaddik, a holy place for Jews.


The signs say that the area is “illegally occupied” by Jews, and that it belongs to the “State of Palestine.” The Hebrew text on the sign explains that the declaration is based on the UN General Assembly's decision from several weeks ago, upgrading the Palestinian Authority's status to that of a “non-member observer.”

A spokesperson for area residents, Yoni Yosef, told Arutz Sheva that “the signs, in English, Hebrew, and Arabic, declare this area as part of the Palestinian Authority state. We will come with a large group today to ceremoniously remove these signs,” making it clear that the area belongs to Israel.

“Shimon Hatzaddik, the High Priest and grandfather of the Maccabees, the heroes of Hanukka, has been buried here for 2,300 years, and a group of people who do not even know how to pronounce his name are going to be able to change that,” Yosef said.

And this is only the beginning!!!
With
Arabs, you give them a finger and they claim the whole arm!
sultana