A Spielberg project for Jews in Arab countries 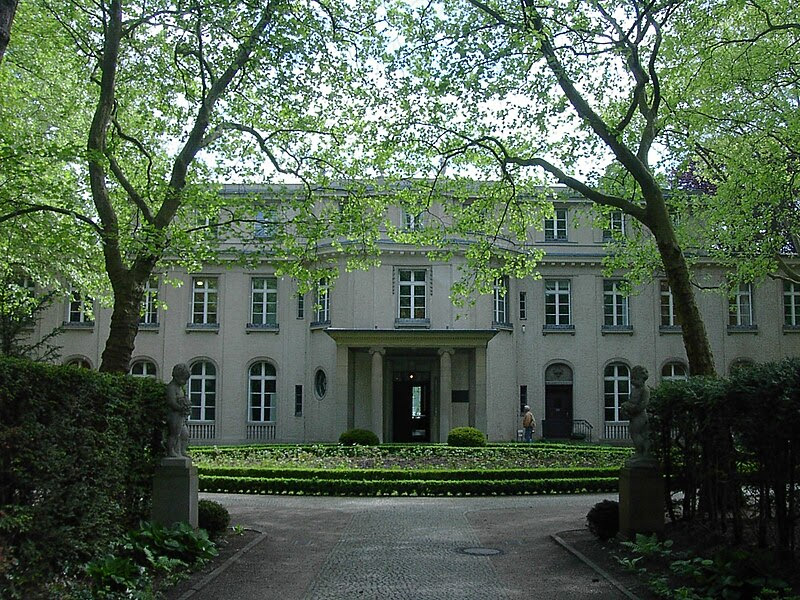 The villa at Wannsee in Germany where the Nazi leadership plotted the extermination of the Jews: Jews of the Middle East and North Africa were to be included in the 'final solution'.

Steven Spielberg set out to record thousands of testimonies of Holocaust survivors from Europe: now Jacqueline Gmach, a woman of Tunisan-Jewish origin living  in San Diego, plans to finish what Spielberg started - by recording the experience and legacy of Nazism in Arab countries. The San Diego Jewish Journal reports:

This lesser-known subset of Holocaust stories went largely undocumented during the initial phase of testimony gathering. Today, an effort has launched to change that. While some testimonies documenting the Sephardi experience exist, they are mostly those of people who left the Arab countries during or shortly after the atrocities of World War II, and not of the people who lived there during that time.

“The experience in these Arab countries is something that is somewhat underrepresented in the archive,” says Karen Jungblut, director of research and documentation at the Institute. “It’s important that a collection of testimonies has the diversity of experiences that did exist represented as broadly as possible, and for one reason or another, we weren’t able to go in and collect these testimonies [earlier], or weren’t able to work with partners to collect [them], so we must do it now [before it’s too late].”

On the front lines in this effort is Jacqueline Gmach, a San Diegan and long-time speaker on the Arab Jewish experience (her family fled Tunis, Tunisia, in the early part of the war, living for a time in Paris, and later settling in Canada and the U.S.). As the director for this special project, Gmach is working to line up donors so that they can begin conducting interviews with this specific population of survivors.

The importance of it, she explains, is to ensure later generations understand the many forms anti-Semitism took during the period, and that what it looked like in Arab countries was different from in Europe (but no less dangerous).

“Those people who were living in Arab countries like Tunisia, Morocco, Iraq, Algeria and Yemen [experienced the Holocaust in] quite a different way from the Jews of Europe,” Gmach says.
Project manager Michael Snyder says the creation of such a collection of testimonies is also crucial in understanding the global reach of Nazi ideology and its policies.

“I think if you were sitting in a room as the Nazi regime planned everything, it would have been easy to see the systematic growth of the Nazis and their plan,” Snyder says. “These Arab countries were part of the same plan as those European countries; there just wasn’t enough time to implement the plan. The victims of these countries who weren’t victims of death camps…still experienced a systematic mental abuse, being in the eclipse of the entire Shoah.”

Snyder says Jews in Arab countries lived for years prior to the events of World War II as second-class citizens, and what the Nazi regime promised to the leaders of these countries was the eventual systematic removal of all Jews in that part of the world.

“It was reflective in the policies of these countries, where Jews, by law … were defined as second-class citizens,” he says. “These Arab Jews were living like this for centuries, and therefore, [their treatment during World War II] was not something brand new. This is why it’s important to document this part of our collective history. It’s not just that this was happening again, but that it was happening with the Nazis promising an end.”

As part of the Final Solution, Gmach says, the Wannsee Conference promised the elimination of 1 million Jews in France, although only 300,000 Jews were living there at the time.
“Scholars interpret [this fact to mean] that to reach this ‘1 million,’ that the Nazis were adding the numbers of Jews residing in Arab countries to this list,” she explains. “So they were a part of the Final Solution and were viewed in the same way by the Nazi regime.”

Read article in full
Posted by bataween at Monday, December 03, 2012

Email ThisBlogThis!Share to TwitterShare to FacebookShare to Pinterest
Labels: Holocaust in Arab and Muslim lands, Jews of Tunisia, Sephardi Voices

I am satisfied that we Jews from the Middle East (yaani Arab countries) are resourceful.
sultana