The erasure of the Jewish history of 'Palestine' is a feature of the delegitimisation campaign being conducted against Israel and Jews in the region. A case in point is the destruction of a stone carving which once belonged to an ancient Gaza synagogue, according to Emet Mi' Tziyon blog (with thanks: Eliyahu):

One notable case is that of a Jewish inscription in the Hebrew and Greek alphabets that still existed as recently as 20 years ago but has since been destroyed, apparently by Islamic fanatics shortly after the start of the hate movement called the First Intifada [according to Haggai Huberman; the first "intifada" started in December 1987]. 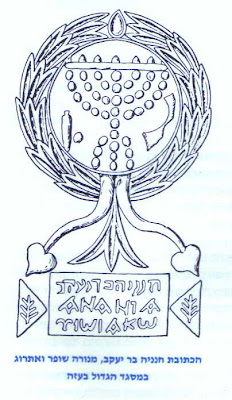 This stone carving was found in 1870, apparently by British travelers. It was discovered in the Great Mosque of Gaza on a stone column which was the upper tier of a double-tiered support for the roof and walls of the mosque.

The mosque structure was originally a Crusader church, built after Baldwin I, the Crusader king of Jerusalem, decided to rebuild the city in 1149, after it had lain in ruins since before the Crusader conquest as a result of wars between Seljuk Turks and other Muslim factions, or may have been destroyed at some point by the Crusaders themselves [according to Michael Avi-Yonah].

In this light, it would seem that the Crusaders re-used parts --including pillars-- of wrecked earlier buildings that were lying around in the ruined city. The Hebrew and Greek inscriptions together with the decorating medallion/wreath, described by Hershel Shanks as "Hellenistic," indicate that the pillar was part of a synagogue built during the late Roman or the Byzantine periods. The Hebrew and Greek are identical in meaning. They are a man's name, Hananyah son of Jacob,

Hananyah bar Ya`aqob [in Hebrew writing חנניה בר יעקב ]. The Greek inscription is Anania giyo Iako, meaning the same thing. Giyo [in today's Greek yiyo] means son or son of. Other features of the bas-relief include a seven-branched, three-footed menorah, a shofar [used in the synagogues on Rosh haShanah and Yom Kippur], an etrog [citron] and a lulav [palm frond].


Note that the Hebrew inscription uses the Aramaic word bar בר, meaning son or son of, instead of the usual Hebrew word ben בן. Aramaic was the predominant spoken language of the Jews in Israel in the late Roman and Byzantine periods. Hananyah was probably a major donor to building the synagogue, and he was honored with a stone carving in his name, just as Jews today honor major donors with stone or metal plaques in synagogues.

The long Jewish history of Gaza