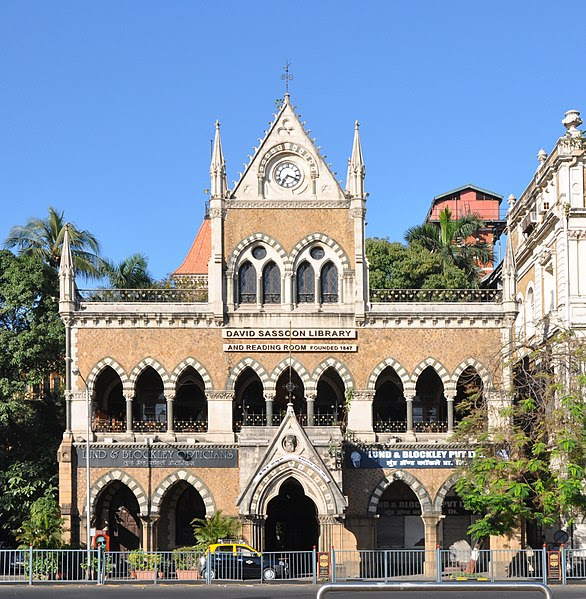 The David Sassoon Library in Bombay


For its regular slot 'On this day in history', Haaretz has chosen to profile the great entrepreneur and philanthropist David Sassoon, who died on 7 November 1864. (With thanks: Lily)

On November 7, 1864, businessman David Sassoon, founding father of the Sassoon business dynasty, died in Pune, India. The trading empire he created spanned the globe,  from what is now Mumbai on the western coast of India, via Shanghai and Hong Kong in China, all the way to London, England. It dominated world commerce in a number of commodities – most significantly opium – over the second half of the 19th century.

Sassoon was born in Baghdad in 1832 to Saleh Sassoon, a businessman and leader of that city’s Jewish community (the clan claimed descent from a Spanish family, the Ibn Shoshans). When David Sassoon, who like his father served as treasurer to the governors of Baghdad, clashed with one of them, Daud Pasha, he moved his family to Persia in 1826, and then to Bombay by 1832.
Sassoon initially owned a counting house and a carpet warehouse, but soon began trading in everything he could, including, most profitably, opium. (...)

Sassoon established a triangle of trade, bringing Indian opium and cotton to China, where he received silver, tea and silk in exchange. He then carried these products to England for sale. (...)

By the 1870s, David Sassoon had come to dominate the trade of opium to China, having pushed the British firm Jardine Matheson and the “Parsi” traders of Bombay out of the business.

Sassoon’s eight sons all went into one branch or another of the family’s business empire, with the Sassoon presence being felt in Hong Kong, Shanghai (where they became major players in the realm of real estate), and India (where they had their own textile mills), among many other lands. The vast Sassoon Docks of Bombay, built by Sassoon's son Albert Abdullah, were the first wet docks in the west of India.

In Jewish history books, David Sassoon, an observant Jew, is remembered mostly for his philanthropy, which included the construction of “Baghdadi” synagogues in Bombay (Magen David) and Pune (Ohel David), and also numerous schools and hospitals throughout India and other parts of Asia. David became a naturalized British citizen in 1853, although he continued to live in Pune.
His son Albert Abdullah moved to England, where he married into the Rothschild family and was elected to Parliament on the Conservative party's ticket. Another son, Sassoon David Sassoon, was the father of Rachel Sassoon Beer, who became owner and editor of the Sunday Times at the turn of the century, and grandfather of the great poet of World War I, Siegfried Sassoon.

Email ThisBlogThis!Share to TwitterShare to FacebookShare to Pinterest
Labels: Jews of India, Jews of Iraq

What's not mentioned in this piece is 1) the role that Rachel Sassoon's newspaper played in presenting an objective picture of the Dreyfus Case.

Also 2) One of the Sassoons was a very accomplished athlete in the sports that the British held in high regard at the time, a horseman, hunter, etc. He became part of the close circle of the Prince of Wales who was willing to sponge off of a Jew as much as off of any body else. Yet his acceptance into the Prince's circle offended many Brits at the time and Punch spent a lot of ink mocking his pretensions to aristocracy as a Jew and a swarthy fellow.

Blog at your service Eliyahu! the story of Rachel Sassoon Beer:
http://jewishrefugees.blogspot.co.uk/2012/04/rachel-sassoon-beer-first-lady-of-fleet.html