Will Labour be the new Sephardi party? 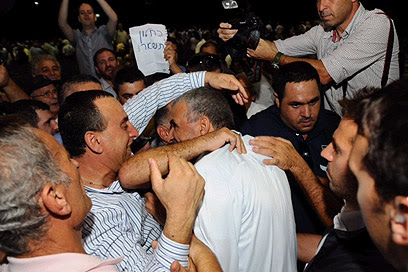 (Libyan-born) Moshe Kahlon being lionised by Sephardi Likud supporters. He is withdrawing from politics

Surprisingly for a party voted into office by a large number of Sephardim, the government centre-right party Likud will have only one Sephardi on its Knesset list come the January elections in Israel. Avi Shushan suspects a 'purge', and tells Ynet News Sephardi readers to vote Labor - the new Likud. But whatever's wrong with Yisrael Beteynu (which has the Sephardi Danny Ayalon), and Shas, the Sephardi party par excellence? (With thanks: Michelle)

My father Morris, God rest his soul, taught me the importance of education, helping others, responsibility and one other thing – he taught me to be aware and proud of my Sephardic roots. "The Moroccans are the best," he used to say, and would vote accordingly: David Levy's Likud, Abu Hatzera's TAMI party, Meir Sheetrit and Shaul Amor, Aryeh Deri's Shas and Moshe Kahlon's Likud. Kahlon is not Moroccan, but my father liked him just the same. He was the true voice of Sephardics in Israel in the new millennium.

"We have to support our ethnic group and the Sephardics. We are just as good as anyone else," my father would say. The fact that ahead of the early elections Likud has only one Sephardic on its roster, Silvan Shalom, is and insult to the party's support base, which consists of a large number of Sephardics.

One has to wonder why Likud is kicking out its Sephardic representatives one after the other. David Levy was continuously humiliated. "David Levy jokes" they used to call them in the 80s. Today people remember how he stood up for his principles and fought for social justice. Meir Sheetrit fled to Kadima when Likud turned into a radical rightist party and gave up on peace for Feiglinism.

Amor was a humble man who said that Bibi stuck a knife in his back and twisted it. Netanyahu buried Silvan Shalom in a small office with little influence. Kahlon is behind the cellular revolution that helped every Israeli financially, but he has left politics. For now, no one knows why. I wouldn't be surprised if it turns out that his decision was related to pressure from his colleagues in Likud and an attempt to hurt his status within the party.

During Kahlon's recent farewell speech before the Likud Central Committee, he asked a number of activists to stop shouting out "stay" and "Kahlon is the king of Israel." He addressed these activists by name – Zaguri, Asulin, Amsalem – all Moroccan. How many Sephardics are currently on Likud's Knesset list? Just one. And yet, this does not stop Sephardics from voting Likud. They are stupid for voting for a party that has abandoned them for names such as Feiglin. To my father, who said Moroccans were "the best," I say: Dad, you were wrong.

Read article in full
Posted by bataween at Sunday, October 21, 2012

I'm troubled by Likud's diminished number of Sephardic representatives - and would like to know the real reasons for it -, but this is clearly a propaganda piece for the Labor party. No matter how many Sephardic/Mizrahi candidates the Labor party might have, we all know that their objectives are opposed to ours.

Not that anyone reasonable would take Ynet seriously...

I see that nothing has changed.More than 50 years ago when my sephardi family arrived in Israel after the
Egyptians gave us a kick in the ..all the good jobs were for the Ashkenazim.The sephardims had and sitll do not have a lot of a say. That is very terrible in a democratic country.We had placed all our hope in Israel, we do not want to be disappointed
sultana latifa
Sultana Latifa

Avi Shushan is wrong. The Likud is having primaries later this year where it will choose its candidate list. Among the Likud MKs are Danny Danon --considered an up and coming party leader-- Miri Regev, Gila Gamliel, MK Shama-Cohen, Tsipi Hotobely --also a leader [but she's Georgian, thus maybe not Mizrahi for some because of Russian influence on Georgia]. These MKs are Mizrahim. And we have not yet had primaries.