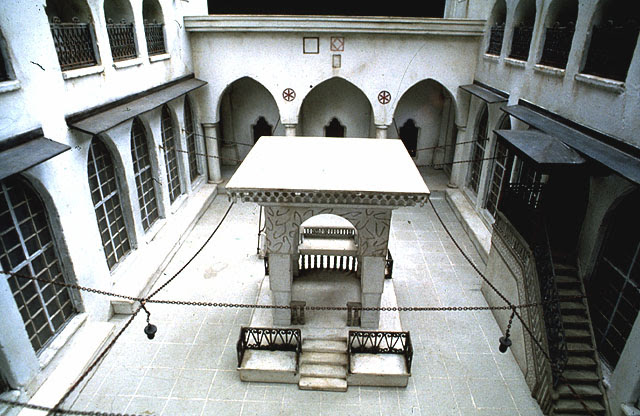 Model of the Great Synagogue, Aleppo at the Beit Hatefutsot museum, Tel Aviv

Whatever has happened to the Great synagogue of Aleppo? So far, there has been no news if the current fighting has damaged the historic building. Matti Friedman reports in The Times of Israel:

Aleppo is one of the world’s oldest and most beautiful cities, its entire Old City recognized as a UNESCO World Heritage site. A recent Lonely Planet guide, now quite useless, described Aleppo as a “fragile treasure” with the “air of an Arabian bazaar city.”

Today, Aleppo appears to be suffering irreparable damage as its people battle inconclusively to control it. (For a gut-wrenching look at the effects of the violence, see The Atlantic’s recent compilation of photos from the city.)

For centuries a cosmopolitan trading center with populations of Muslims, Syrian Christians, Armenians, and foreign traders, Aleppo was also once home to one of the world’s oldest Jewish communities. The Aleppo Jews had been there for centuries by the time the Second Temple in Jerusalem was destroyed by Rome in 70 CE.

This week, reports emerged that the 12th-century Ummayad mosque in Aleppo, used as a base by government troops, was badly damaged. The Citadel, the fortress that dominates the Old City, has also been harmed. A large fire consumed swaths of the medieval souks. But there has been no news of the Great Synagogue, a structure that dates back 1,500 years and was as recently as two decades ago the world’s oldest continually functioning Jewish house of prayer. For the Jews of Aleppo, it was the traditional center of communal life and a symbol of their unique continuity in this Syrian city.
Since the last Jews left two decades ago, the outwardly inconspicuous building — which sits behind a wall off an alleyway in what used to be the Jewish Quarter — has been locked, accessible only with the permission of the regime. Occasionally visited by foreigners, it was intact before the fighting started.

Accurate reports of the extent and location of the damage in Aleppo are hard to come by, and since there are no Jews left in the city, the synagogue has drawn no notice amid the more famous sites threatened or damaged in the fighting.

The heritage center has received no information on the building’s fate, Kassin said, or on the several dozen other Jewish sites — empty synagogues and schools, as well as cemeteries and other communal properties — that remain in the city under government custodianship.

The oldest part of the Great Synagogue, a basilica, dates to the 5th or 6th centuries CE, when the city was under Byzantine rule. Jews are thought to have been in Aleppo for 800 years or more by that time. Local traditions claimed the building’s foundations had actually been laid by Yoav, King David’s general, who captured Aleppo — known in Hebrew as Aram Tzova — in an episode briefly mentioned in the Bible.

Over the years, the synagogue was expanded several times. It was repaired after a Mongol invasion and massacre, and again after a later earthquake devastated the city. Beginning in the 14th century, the synagogue housed the Aleppo Codex, the most accurate copy of the Hebrew Bible and Judaism’s most important manuscript.

The synagogue, with its dark grottoes, interlocking chambers, seven arks of the Torah, and sunlit courtyard where prayers were held in summer, was the scene of many of the stories and legends recounted by local Jews. One of the more popular ones involved a mythical snake which lived inside a walled-off niche known as the “Sealed Ark,” and which was said to emerge to protect the community in times of danger.

After the United Nations vote on November 29, 1947, to partition Palestine, mobs in Aleppo attacked the Jewish community. The rioters burned stores, schools, homes, and 18 synagogues, according to contemporary reports. The Great Synagogue was torched. The Aleppo Codex disappeared, resurfacing mysteriously in Jerusalem ten years later. The riot marked the beginning of the end for Aleppo’s Jews, who began fleeing Syria for Israel or the West. Most were gone by the mid-1950s, part of a great exodus of Jews from Islamic countries in those years. The synagogue fell further into disrepair.

Read article in full
Posted by bataween at Wednesday, October 17, 2012

No news, good news. Frankly, I don't see the point of calling attention on the fact that "nothing happened to it". If that's what passes as novel information, then it's really sad.