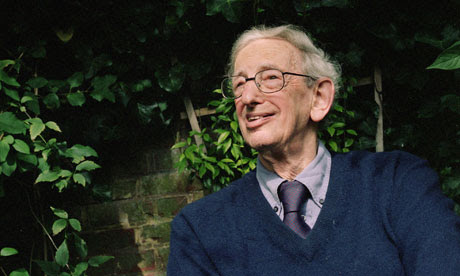 Like him or loath him,  it might surprise you to learn that the Marxist historian Eric Hobsbawm, who died yesterday aged 95, was an Egyptian Jew by birth. From his obituary in The Guardian:

Hobsbawm was born in Alexandria, a good place for a historian of empire, in 1917, a good year for a communist. He was second-generation British, the grandson of a Polish Jew and cabinet-maker who came to London in the 1870s. Eight children, who included Leopold, Eric's father, were born in England and all took British citizenship at birth (Hobsbawm's Uncle Harry in due course became the first Labour mayor of Paddington).

But Eric was British of no ordinary background. Another uncle, Sidney, went to Egypt before the first world war and found a job there in a shipping office for Leopold. There, in 1914, Leopold Hobsbawm met Nelly Gruen, a young Viennese from a middle-class family who had been given a trip to Egypt as a prize for completing her school studies. The two got engaged, but the first world war broke out and they were separated. The couple eventually married in Switzerland in 1916, returning to Egypt for the birth of Eric, their first child.

"Every historian has his or her lifetime, a private perch from which to survey the world," he said in his 1993 Creighton lecture, one of several occasions in his later years when he attempted to relate his own lifetime to his own writing. "My own perch is constructed, among other materials, of a childhood in the Vienna of the 1920s, the years of Hitler's rise in Berlin, which determined my politics and my interest in history, and the England, and especially the Cambridge, of the 1930s, which confirmed both."

In 1919, the young family settled in Vienna, where Eric went to elementary school, a period he later recalled in a 1995 television documentary which featured pictures of a recognisably skinny young Viennese Hobsbawm in shorts and knee socks. Politics made their impact around this time. Eric's first political memory was in Vienna in 1927, when workers burned down the Palace of Justice. The first political conversation that he could recall took place in an Alpine sanatorium in these years, too. Two motherly Jewish women were discussing Leon Trotsky. "Say what you like," said one to the other, "but he's a Jewish boy called Bronstein."

Read article in full
Posted by bataween at Tuesday, October 02, 2012

Hobsbawm was no friend of Israel or Judaism. This is what he said about Shlomo Sand's obnoxious book: "Shlomo Sand's The Invention of the Jewish People (Verso) is both a welcome and, in the case of Israel, much needed exercise in the dismantling of nationalist historical myth and a plea for an Israel that belongs equally to all its inhabitants. Perhaps books combining passion and erudition don't change political situations, but if they did, this one would count as a landmark."

"What exactly could 'being Jewish' mean in the 1920's to an intelligent Anglo-Viennese boy who suffered no anti-Semitism and was so remote from the practices and beliefs of traditional Judaism that, until after puberty, he was unaware even of being circumcised? Perhaps only this: that sometime around the age of ten I acquired a simple principle from my mother on a now forgotten occasion when I must have reported, or perhaps even repeated, some negative observations of an uncle's behaviour as 'typically Jewish'. She told me very firmly: 'You must never do anything, or seem to do anything that might suggest that you are ashamed of being a Jew.'

I have tried to observe it ever since, although the strain of doing so is sometimes intolerable, in the light of the behaviour of the government of Israel. My mother's principle was sufficient for me to abstain, with regret, from declaring myself konfessionslos (without religion) as one was entitled to do in Austria at the age of thirteen. It has landed me with the lifetime burden of an unpronounceable surname which seems spontaneously to call for the convenient slide into Hobson or Osborn. It has been enough to define my Judaism ever since, and left me free to live as what my friend Isaac Deutscher called a 'non-Jewish Jew', but not what the miscellaneous regiment of religious or nationalist publicists call a 'self-hating Jew'. I have no emotional obligation to the practices of an ancestral religion and even less to the small, militarist, culturally disappointing and politically aggressive nation-state which asks for my solidarity on racial grounds. I do not even have to fit in with the most fashionable posture of the turn of the new century, that of 'the victim', the Jew who, on the strength of the Shoah (and in the era of unique and unprecedented Jewish world achievement, success and public acceptance), asserts unique claims on the world's conscience as a victim of persecution.

Right and wrong, justice and injustice, do not wear ethnic badges or wave national flags. And as a historian I observe that, if there is any justification for the claim that the 0.25 per cent of the global population in the year 2000 which constitute the tribe into which I was born are a 'chosen' or special people, it rests not on what it has done within the ghettos or special territories, self-chosen or imposed by others, past, present or future. It rests on its quite disproportionate and remarkable contribution to humanity in the wider world, mainly in the two centuries or so since the Jews were allowed to leave the ghettos, and chose to do so. We are, to quote the title of the book by my friend Richard Marienstras, Polish Jew, French Resistance fighter, defender of Yiddish culture and his country's chief expert on Shakespeare, 'un peuple en diaspora'. We shall, in all probability, remain so. And if we make the thought experiment of supposing that Herzl's dream came true and all Jews ended up in a small independent territorial state which excluded from full citizenship all who were not the sons of Jewish mothers, it would be a bad day for the rest of humanity - and for the Jews themselves."
-- Eric Hobsbawm: Interesting Times: A Twentieth Century Life (Pantheon, 2002, p.24).

some of these old Commies are like the Bourbons. They forget nothing and they learn nothing.
S Sand took off from Stalin's claim circa 1914 that modern Jews were not or no longer a nation because they did not have a common language, common economic life, common territory, etc. Sand is just defending Stalin's claim that the Jews are not a nation, actually going farther than Stalin did in some ways.

He was a life long supporter of Stalin and openly called for the deaths of 10 or 20 million people or more if it meant the 'victory' of world Marxism. That his obit is in al Guardian is no shocker.

Well Sand's hadd to first deny that there was an exile as a premiss for the negation of peoplehood. But in practice, he set out to "prove" that Ashkenazim and Sephardim are not of the same "race".

I imagine Hobsbawn didn't read Sand's book if that's what he said. Sand doesn't deal with the evidence and it is full of historical errors visible to the naked eye, much more so to the eye of a historian.

I see Hobsbawn as the secular twin of Yeshayahu Leibowitz. One was secular, the other ultra-Orthodox, but they had in common their contempt for the ordinary Jew, an incredible sense of superiority and they both studied in Berlin prior to WWII.

Committee of Baghdadi Jews in Ramat Gan speak out against the Israeli government's campaign to equate Palestinian refugees and Jewish refugees from Islamic lands:

Here's something that I learned very recently. A high Polish official invited Sefardic Jews to settle in a new town that he built in southeastern Poland in the 16th century, Zamosc. Ashkenazi Jews eventually moved there too. And the two communities eventually combined. Interestingly, one of the three great classic Yiddish authors was surnamed Peretz, Yits'haq Leyb Perets, who was born precisely in Zamosc. Someone on the Net [ha-historyon] argues that the Israeli politician Amir Perets has a certain resemblance to Y L Perets. The family name Sfard is also known in Poland and Dovid Sfard was a fairly well known Yiddish poet in the Communist period. There is also an obnoxious Israeli "leftist" named Michael Sfard whose family may come from Poland. This info does not fit Shlomo Sand's narrative of course.