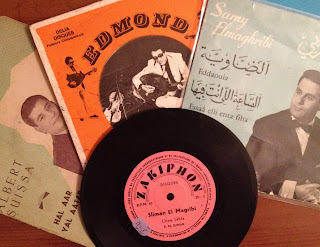 Chris Silver of Jewish Morocco blog is on a musical journey of discovery: in France this summer, he attended a concert of chaabi music, popularised by the recently-reconstituted Arab-Jewish band El Gusto. Touring with El Gusto is  Algerian-Jewish musician Luc Cherki, whose compositions seem to epitomise estrangement and exile. (With thanks: Michelle)

While in France, I had the tremendous opportunity to see live music as well. Thanks to the kindness of Safinez and Nabila I met with members of the recently reconstituted 1950s-era Algerian chaabi orchestra El Gusto. I was privileged to have ftour (Ramadan break-fast meal) with these master musicians and glean hidden nuggets of music history from the likes of Algerian pianist Maurice El Medioni through informal interviews backstage. The concert itself, in an amphitheater on the water in beautiful Sète (also interestingly a ferry point for North Africa), was electric. A couple observations from the concert before I jump to our artist of interest.

Monsieur Luc Cherki: In the lead up to the concert I chatted with Luc (sometimes Lili) Cherki, a musician who had long been a curiosity of mine but whom I had never written about. Luc was born on August 8, 1936 and spent his formative years in Algiers, Algeria. He came of musical age in the 1950s at a time when chaabi music across the Maghreb was on the ascent. What made him special (in part) was that he could not only jam on the guitar in a number of styles but could also sing distinctively in Arabic, French, and Hebrew. As the end of the decade approached, his identity as an Algerian Jew of French citizenship became increasingly complex. Like most of his fellow coreligionists Luc Cherki left Algeria for France by 1962 and has never returned. He increasingly sang in French and became associated musically and politically with his French hit Je Suis Pied Noir.

Luc Cherki recorded for a variety of labels in France including Kahlaoui's Dounia. His Arabic music was often forgotten as the years wore on and by the end of the 1980s he seemed to distance himself from music all together. He took a nearly 15 year musical break before returning to the performing stage in the 2000s and now tours with El Gusto.


L’Mouèma: Yes, I'm posting a song about a Jewish mother, an Algerian Jewish mother to be exact. L’mouèma is the affectionate word for mom in darija, North African Arabic. The album artwork from this 1970s Luc Cherki release features a dedication to children deprived of their mothers' love. When I asked my friend Jawad (check out his Juifs Berberes photo blog) for some help with the lyrics, he concurred that the song was written about a mother but he offered another explanation. L’mouèma can also stand in for the motherland, he said. In other words, it's possible that Luc Cherki is singing here about his longing for Algeria. The song begins with, "separation is worse than death." Take a listen. I hear hints of Cheikh Zouzou's Bensoussan here in the music. The theme of exile, estrangement is ominpresent. What I also find fascinating about this song (and really El Gusto as a concept) is how much it complicates the narrative. Cheers.
Read post in full
Posted by bataween at Wednesday, October 17, 2012

the article at the link is an appeal to Mursi of Egypt to stop being hypocritical about defamation of religion which Muslims are doing all the time to other religions. Yet the article is too soft and the authors pull their punches.

Great post and kol hakavod for the magnificent work Chris Silver is doing.

Gusto/gosto is also a fascinating Jewish linguistic concept though the term is no longer in use.