Last week the Palestinian lobby was so satisfied with Daniel Haboucha, a recently-qualified lawyer in Canada whose family was expelled from Egypt, that it circulated his critique of  Danny Ayalon's campaign for Jewish refugee rights for the Times of Israel to its mailing list with the note 'worth reading'.  Philippe Assouline, also a descendant of Jews from an Arab country, has now written this forceful rebuttal. Now that is 'worth reading' in full:
In what would amount to gross legal malpractice, Haboucha mentions none of these crucial details. He makes no distinction between, on the one hand, the mass expulsion and dispossession of close to one million Jews from Arab countries based on their religion alone, and, on the other, the displacement of 650,000 Arabs pursuant to their own, genocidal war of aggression against genocide survivors. In his account, the Arabs are not responsible despite having started the war that caused the refugee problem and despite keeping those refugees in captivity for generations. It is on Rabin (actually Yigal Allon - ed) — himself a refugee from Jerusalem who was defending his people from Jordanian aggression — that blame must fall. I wonder if Haboucha will teach this moral evasion to his children. 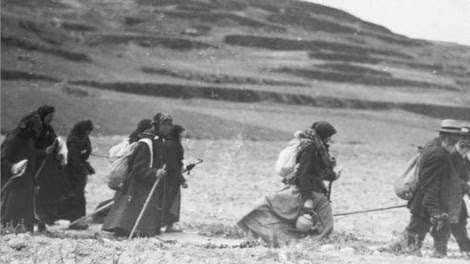 Regardless, the responsibility for the Palestinian refugee problem lies strictly with the Arab leaders who initiated a war for no other reason than chauvinist folly, a war that brought nothing but suffering to Israelis and Palestinians alike.

The crime of Jewish self-determination:

As the article makes clear, Haboucha’s grievance is with Jewish self-determination itself:

Israel’s founders knew long before 1948 that the establishment of a Jewish state in the heart of the Arab world would spell catastrophe… Zionism transformed Jews in Arab countries from members of a deeply rooted religious minority into “enemy nationals.” When made aware of the impending danger faced by the Jews of Iraq in the 1940s due to mounting hostility toward Zionism, David Ben Gurion felt responsible for the harm he suspected would befall them; he referred to these Arab Jews as potential “victims” of the Zionist movement.

A number of fallacies are trafficked in this passage. First, long before 1948, Naboucha’s “Arab world” was in fact Turkish. And it included areas that are today “Arab” merely by dint of colonialism. Naboucha’s “Arab world” is in reality also Maronite, Assyrian, Coptic, Kurdish, Amazigh, Kabyle, Berber. And Jewish. Those indigenous populations would recoil if told that their lands were Arab, and his use of that term is a legitimization of the ongoing suppression of indigenous peoples by Arab states.

Similarly, Haboucha’s use of the trendy if nonsensical term “Arab Jew” is also heavily ideological. Haboucha should know that Jews in North Africa and the Middle East long predate the Arab invasions. Genetic studies have recently shown limited to no mixing with the Arab occupiers throughout the centuries. There were cultural differences as well. To use the term “Arab Jew” in that manner is to suggest that Zionism denatured Jews and turned them from Arabs into the “enemies” of Arabs. By fabricating an idyllic, pre-Zionist Middle East and by accusing Zionism of inventing Jewish peoplehood, Haboucha aligns his article with revisionist PLO pamphlets. And he denies to Jews the very peoplehood that he assumes for Palestinians.
As if on cue, Haboucha then starts to blame the violence that scared many Jews into leaving Arab countries in the 1950s on the Jews themselves.

Similarly, Jewish emigration from Iraq accelerated in 1951 after the bombing of a synagogue; this act was blamed at the time (by British consular officials and many Iraqi Jews) on Zionist agents. To my knowledge, there is no conclusive evidence supporting this claim, yet it is lent credibility by the recent admission by a former member of the Iraqi Zionist underground that members of his group did employ such tactics.

This is not wholly different from blaming the Holocaust on Jews. Maybe Mr. Haboucha should be reminded of the Farhoud massacre, or all of the other massacres of Jews that occurred in the Middle East before 1948. In any case, it is risible that an attorney would make a case on less than a handful of anecdotes – some, by his own admission, wholly unsupported – in order to speak for, against and over the testimony of hundreds of thousands of dispossessed Jews from Arab states and their official representatives.
But Haboucha’s argument that the Jewish refugees are victims of Zionism (and not of the Arab states that made them into refugees) becomes even more flimsy as the article goes on. He states:

Compounding their hardships, Arab Jews who settled in Israel were subjected to deep systemic discrimination, economically disenfranchised, and treated as culturally inferior. This phenomenon is still something of a sore wound in Israel, and is documented extensively in an emerging field of literature.

If Jewish refugees from Arab countries continued to suffer in Israel it is all the more reason to seek redress from those who, by expelling them, caused that suffering.  And if Zionism is responsible for alleged discrimination in imperfectly integrating Sephardic refugees into Israel, then it is similarly the Arabs – and not Israel – who must be held to account for the ongoing suffering of Palestinian refugees and their descendants in their midst. I’ll add that to make his point that Sephardic Jews were discriminated against in Israel, Haboucha quotes lyrics from a Moroccan Israeli wedding band. That alone should be enough to discredit his article.  But there is, unfortunately, more.

Having just told us that Sephardic refugees were treated as second-class citizens in Israel, and were therefore victims of Zionism, Haboucha reverses himself and informs us that, no, Zionism actually treated the Jewish refugees as compatriots, and they are therefore not refugees:

Mizrahim who settled in Israel were treated at the time by the government — at both a legal and a rhetorical level — not as refugees who had been forced from their homeland, but as compatriots returning to their homeland after years in exile. Ayalon’s initiative prompted Palestinian-Israeli member of parliament Ahmed Tibi to ask glibly, “How many homelands do [Jews] get to have?”

Let us skip over the fact that he is choosing to quote Ahmed Tibi – an elected lawmaker in Israel’s parliament who found it acceptable to also serve as adviser to arch-terrorist Yasser Arafat — on the issue of dual loyalties. Let us also gloss over the fact that people today often have two or even three homelands. Haboucha’s main assertion here is that because the expelled Jews immigrated to Israel rather than to another country, they are not refugees. This is absurd.

A refugee is someone who has been forced to leave his or her country in order to escape war, persecution, or natural disaster. That definition doesn’t change if those fleeing end up in a good place and manage to build a better life for themselves.

To Haboucha, however, refugee status and the concomitant pity that it commands are to be granted not to those who have been forced from their homes but rather to those who have been abused by their adoptive countries. Jews are not refugees to Haboucha, because they chose to go to Israel after being expelled and now are part of the fabric of that state. The Palestinians and their descendants, however, are refugees because they are still being mistreated and excluded from their adoptive countries. This is akin to saying that those who fled Nazi Germany early in the war were not refugees by virtue of the fact that they ended up on American soil where they thrived.

It is to turn the concept of refugee on its head.

Why it can be cool to suppress 'Mizrahi' history
Posted by bataween at Wednesday, October 10, 2012