A New York rabbi is helping break down Arab hostility and misunderstanding of Jews and Judaism with his Arabic language website - Asl al- Yahud (Origins of the Jews). A most worthy initiative, in my view, as long as it does not whitewash the points of division between Muslims and Jews. Report in the Jerusalem Post: 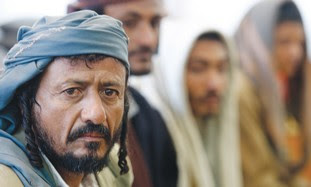 Gabbai is confident he has had a positive impact in toning down his interlocutor’s initial hostility toward, and misunderstanding of, Judaism.

Similar exchanges with other Arabic speakers have led to additional questions and more extensive online conversations.

“There is a thirst for information, knowledge about Jews,” says Gabbai.

An Arab journalist who writes for one of Yemen’s top papers wrote to Gabbai about a neglected Jewish graveyard in Aden. They corresponded frequently, discussing, among other topics, the rich history of what was once the largest Jewish community in the Arab world.

The nexus is Asl al-Yahud (Origins of the Jews), an Arabic- language website Gabbai created under the auspices of the American Jewish Committee four years ago. Asl al-Yahud – www.aslalyahud.com – is a growing resource in print, photographs and video about Judaism, and the history of Jewish communities in Arab countries.

“The website is advancing understanding of Judaism for Arabic speakers,” says Gabbai. He single-handedly manages the site’s content, and also runs a related Facebook page, in Arabic, where much of the conversation occurs.

Gabbai is passionate about maintaining the culture and traditions of Jews from Arab countries. His parents are active members of the aging Iraqi Jewish community in Israel. His mother’s family came from Iraq, and his father was one of the last Jews to leave Egypt. Gabbai was born in Israel, and after growing up in New York and New Jersey, he attended Yeshiva University.

The Arabic website project is a synergy of Gabbai’s personal mission and AJC’s pioneering inter-religious work, addressing one of the greatest interfaith challenges of the 21st century – Jewish-Muslim relations. Asl al-Yahud is purposely apolitical. It does not take on the contentious, divisive political issues that dominate discourse about the region, nor does it offer specific guidance on advancing Muslim-Jewish relations.

But recalling the historical interactions of Jews and Muslims over the centuries is a key to deepening understanding of Judaism among Arabs across the Middle East.

“Islamic sacred texts sometimes lend themselves to negative interpretations of Judaism,” says Gabbai. Given the views of Jews that may permeate mosques and school curricula in Arab countries, the Asl al-Yahud journey faces enormous roadblocks. “This website is not expecting visitors to have positive attitudes. We have to overcome initial assumptions.”

Gabbai believes it is important to explain Judaism through the use of Arabic-language sources and the teachings of renowned Jews who lived in Arab lands. He excerpts on Asl al-Yahud the works of Sa’adya ben Joseph al-Fayyumi, the 10th century Egyptian-Baghdadian scholar who translated the Hebrew Bible into Arabic, Maimonides, and other legendary rabbinical scholars and thinkers. “We are explaining Judaism from a Middle East vantage point,” says Gabbai.

Online conversations with inquisitive Arabs – whom he is unlikely ever to meet in person – occupy some of Gabbai’s time most working days, but he finds each encounter intriguing and energizing.

During the Islamic Holy Month of Ramadan, visitors from Egypt and Saudi Arabia accounted for some 36 percent of the web traffic. “Saudis tend to have more informed questions,” says Gabbai. Some Saudis access the site to check on what they are taught in their own schools in the kingdom.

The Arabic website offers detailed historical information on lost or extant Jewish communities in Iraq, Kurdistan and Saudi Arabia, and soon will include sections on Algeria, Egypt, Libya, Morocco, Tunisia and Yemen.

“Videos are vitally important to conveying the story and explaining Jewish rituals and religion,” says Gabbai. Before Passover, he made a short film with Arabic narration on making matzo. A Yemeni Jewish woman described the ingredients and process as she produced the unleavened bread. The famed Ben-Ezra synagogue, home of the Cairo Geniza, was featured in an informational video on the design and rituals of synagogues in the Arab world.