There's life yet in the Jews of Turkey 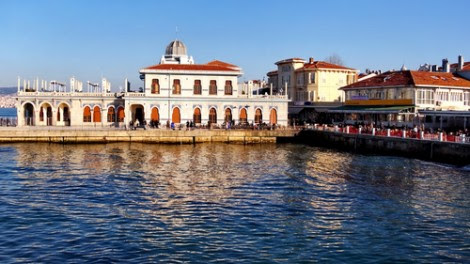 The Princess Island Port in Büyükada (Istanbul image via Shutterstock)

Reports of the death of Turkey's Jewish community appear to be premature: writing in The Times of Israel, Gabriel Mitchell stumbles on a vibrant commemoration of Tisha B'Ab on an island off Istanbul by Turkish Jews and their visiting Israeli relatives:

There are few Jewish communities remaining in the Muslim world, and Turkey’s stands out for a variety of reasons, particularly for its largely peaceful relationship with the Ottoman Empire and, later, Turkey: even upon the establishment of the Turkish Republic in 1923, when minority groups, including Jews, were subjected to a rash of nationalist policies, the community faired well by comparison. (Thousands of Greeks were forcibly transferred in exchange for their ethnic Turkish counterparts, and the Armenian community suffered far worse.) Though many Jews left Turkey to seek better religious and economic fortunes elsewhere, the continued existence of today’s small but vibrant population is a testimony to its perseverance in the face of Istanbul’s changing cosmopolitan dynamics.

The 21st century, however, may be the final chapter in Turkey’s rich Jewish history. The Jewish community of Turkey is rumored to be dying. According to its lay leadership, roughly 20,000 remain, but assimilation rates stand at 50%. While it may still take several decades before it dies out, the statistics do not bode well for one of the world’s oldest Jewish communities.

Dead or alive, I wanted to experience the community on my own terms. Brink-Danan’s work read like a “pre-mortem” eulogy. Trips with Kivunim offered the standard visits to the famed but disused Ahrida Synagogue and Istanbul’s solitary Jewish school in Ulus. I wanted to seek out the community in order to understand it for what it may have been, and appreciate whatever it happens to be at present. There seemed no better place than the island of Büyükada.

Büyükada is situated in the Sea of Marmara, a short boat ride from Istanbul’s bustling docks. Still within eyesight of Istanbul’s towering skyline, Büyükada and its neighboring islands are in many ways a different world. Even during the Ottoman period they were the site of vacation homes for Istanbul’s elite, and its minority communities. Churches, monasteries and synagogues feature prominently on the island’s wide, crisscrossing boulevards, where only bicycles and fayton (horse and buggy) are permitted to ride.

Before visiting the island (with my wife, who was visiting for the weekend), a member of the community recommended that we visit the synagogue, or havra. “Saturday night will be very busy, it is the Tisha B’Av fast.” My friend told me it would be easy to find the havra, but this turned out to be far from the truth. I searched high and low without success. Each turn led me further into the maze of homes whose wooden sides bent under the summer sun. Hoping that perhaps I had been following the directions incorrectly, I backtracked to the pier.

That’s when I heard Hebrew. Yes, Hebrew: the language that one would think shouldn’t be used on the streets in Turkey, given the current political climate, but that ironically is the last language the average Turk would recognize. It turned out to be a family of six or seven Israelis, hanging around a pay phone and jabbering away.

Asking a random Israeli family on a resort Turkish island for directions to the synagogue seemed awfully clichéd, but isn’t that what being Jewish, and even more so Israeli, is all about? They were Turkish-Israelis (of which there are many) from Bat Yam, who had returned to visit family and vacation on the island. While walking to the synagogue, the wife explained to me that almost half of the Büyükada’s summer population is Jewish. “Can’t you tell who is Jewish?” she asked (read: told) me. “It is so easy to tell.” She hadn’t been to the Hesed Le Avraam Synagogue since she was little, or at least that was the excuse she used to prove to me how talented she was at distinguishing the Jews on the street. Each and every person we stopped knew exactly where to find the havra.

We reached the empty street of Hesed Le Avraam, or at least the massive steel door that protected it. Choosing not to go inside for fear of somehow spoiling my expectations for the evening, I quickly received information regarding Tisha B’Av services and returned to our hotel (not without a million thank yous to my accidental Israeli guides).

My wife and I returned to Hesed Le Avraam that evening. The empty street I had seen earlier that day was blocked off at both ends with temporary barricades and a squad of gendarmes. People passed through undisturbed, but not before the local authorities gave them a thorough visual inspection. As we were clearly outsiders, by the time we had reached the steel door of the synagogue at least two officers had requested to see our passports.

Hesed Le Avraam, orientalist in design and stunningly beautiful, was packed with Turkish Jews preparing for the fast. Although the majority of men in the congregation (there were only four woman in attendance, including my wife, listening from the upstairs balcony) were above the age of 50, there was a significant number of young men sitting with their fathers, and children sliding about on the stone floor, sneaking in and out the door whenever they had the chance. Mustachioed gentlemen whispered quietly in Turkish, but Hebrew could also be heard. Istanbul’s Chabad rabbi, New York Yankees hat and all, was also in attendance. Simply put, the synagogue was filled with life. The site was so powerful, so unexpected, that it was difficult to focus on my own prayers.

The hazan chanted one of the speediest recitations of “Eicha” (“The Book of Lamentations”) in a Sephardic melody that I had ever heard. As I prepared to stand up and head toward the door, the lights went out. A lit candle was raised, radiating slowly along the ornate golden banisters above. Everyone sat in silence. In my broken Turkish, I asked the man next to me what was happening. He explained that the hazan, in a Turkish-Ladino-Hebrew hybrid, was recounting the years since the destruction of the temple.


Read article in full
Posted by bataween at Friday, August 03, 2012

I went to the link on the previous comment. Lara Friedman, a self-styled "peace activist" is belittling the sufferings of Jewish refugees from Arab countries. But some of the responses are very good and instructive.

Indeed Eliyahu some of the responses are better than the original article.

Either Daily Beast writers all suffer from acute reading comprehension deficiency, or else they purposely occult relevant information so as to generate controversy and consequently attract more comments. I think it's the latter.

Hope to publish a rebuttal of this soon

this ill-informed comment by Lara Friedman appears on peter beinart's Open Zion blog. Her comment is what you would expect from beinart and his friends.

Nov 2012 just received this email from the JDC about a Jewishly oriented tour to Turkey, for what it is worth:
http://jdcentwine.org/trips/inside-jewish-turkey-2013