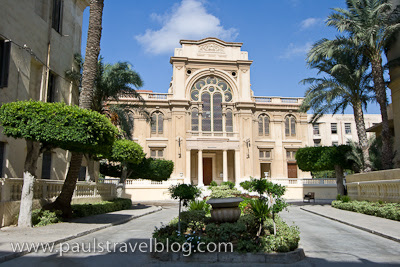 
Point of No Return exclusive

Update: the leader of the 'Jewish community' and the Egyptian authorities have denied this story. They claim that Jews are free to conduct services in the synagogue. But a service without a minyan (quorum) is no better than praying at home: the 'community' is prohibited from importing a minyan from abroad.


For the first time in 2,000 years, this year there will be no Rosh Hashana and Yom Kippur services at the Eliyahu Hanavi Synagogue in Alexandria.

The synagogue was the last 'working' synagogue in Egypt. A synagogue has stood on this site since Hellenistic times, although the current building dates back to the 19th century.

The Egyptian authorities have banned High Holiday services for 'security' reasons. The decision, announced on Monday, comes as a blow to Rabbi Avraham-Nino Dayan, an Israeli of Egyptian origin, who every year takes on the task of assembling a minyan (quorum) of volunteers from Israel and abroad. There are only two Jewish men and some 20 Jewish widows living in Alexandria.


Levana Zamir, who heads the International Association of Egyptian Jews in Israel, comments: "It seems this is really the end of Jewish life in Egypt. The authorities have found a way to take over the last Jewish bastion, since all the remaining synagogues are already archaeological and tourist sites. It is very sad."

The Passover Seder in Alexandria last year was also cancelled for security reasons, although a Seder took place in Cairo. High Holiday services are usually held for expatriate Israeli embassy staff at the Maadi synagogue in Cairo. Since the fall of Mubarak, Israelis have been flying home to spend the holidays with their families.

Model of the Eliyahu Hanavi synagogue in Israel

Crossposted at Elder of Ziyon
Posted by bataween at Thursday, August 30, 2012

No, this is a dark moment, a nadir, but not the end of Egypt's association with Jews, what about the prophecy, 'Whom the LORD of hosts shall bless, saying, Blessed be Egypt my people, and Assyria the work of my hands, and Israel mine inheritance.' Isa 19.25 The context speaks of the future not the past.

Ok, it's time to count the widows in the minyan. Foolhardy and ridiculous to let the community die when there are still men and women who number themselves among the Jews. Reform and Conservative communities count women - Alexandria must adapt and do the same so that the Jews of Alexandria may worship together. We stand with you!