Jews in Berber or Arab Morocco were never secure

Writing in Jewish Ideas Daily, Diana Muir Applebaum gives essential historical context to Kamal Hachkar's nostalgic film about ex-Berber Jews now in Israel and relations with their Muslim neighbours. Although Jews and Berbers were North Africa's indigenous peoples, there were times when Berbers were the most fanatical of Muslims - Maimonides had to flee the Berber Almohades in Spain in the 12th century.

Do they regret leaving? No—and not merely, as one Israeli-born daughter reminds her mother, because in Morocco the woman had to wash clothes by hand in the river. The Jews left because they had to leave.
The Berber regions of Morocco were tribal and were not fully controlled by central authorities until well into the 20th century. Although Berber tribes understand themselves as extended families, descendants of a single, named ancestor, reality is more complicated. Families of slaves, former slaves, and survivors of defeated tribes can join a tribe as subordinate members. Berber Jews belonged to their tribes in this subordinate way. In the film, Hachkar walks the ruins of the abandoned Jewish quarter of a small Berber town as an elderly man describes the close friendships between the Jews and Muslims: The Jews of his tribe were like brothers, he says, and fought with the tribe to defend its territory. But when asked whether Jewish and Muslim young people could fall in love and marry, he recoils in shock.
You can still see traces of the Berber Jews in the geometric, humanoid carvings on the gravestones in the old Jewish cemetery of Mogador, modern Essaouira. Berber Jews fascinated 20th-century French ethnologists, who came to study them and photograph Jewish Berber women, with their distinctive tribal jewelry, embroidered robes, and tattooed faces. But only a small percentage of Morocco’s Jews were Berber-speakers. Larger numbers of Arabic-speaking Jews lived in Fez, Marrakech, and other cities and spoke Jewish versions of their regions’ Arabic dialects. After 1492, they were joined by Sephardim expelled from Spain. For the next five centuries, the communities maintained their distinctive customs, languages, and synagogues. 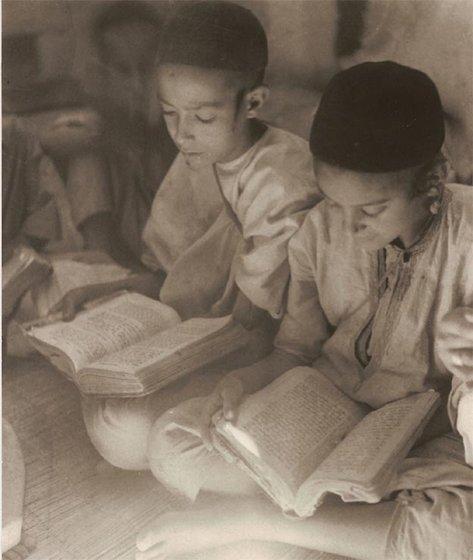 Traditional religious school, Tiznit, 1935. Courtesy of Juifs Berberes.
It is easy to get nostalgic about Jewish life in Morocco—picturesque towns, wonderful food. Today, the few thousand Jews who remain, mostly in the business hub of Casablanca, have full citizenship. Jews are welcome to visit and run businesses. The government has a moderate attitude toward Israel.
But Jewish life in Berber or Arab Morocco was never secure. This year is the centennial of the Fez Pogrom of 1912, a useful reminder that the history of the Jews in Arab North Africa was very like their history in other Christian and Muslim lands. Muslims saw Jews as inferior. Jews understood that they lived at Muslim sufferance. Jews could and did rise to great wealth and power in Moroccan society; but they had no rights, only such privileges as Muslim society and sultans chose to grant them. For centuries, they put up with what their neighbors dished out: petty humiliations, heavy taxation, occasional violence. The Jews of Fez responded to news of the first Zionist Congress in 1897 by establishing a chapter of Hibbat Zion (Lovers of Zion).
In 1948, Moroccans responded to the creation of Israel with deadly pogroms in Oujda and Jerada. In a wave of Jew hatred over the next several years, Jews were kidnapped and murdered. They were not expelled, as in Algeria; but Morocco had become dangerous, and they began to leave. They went to France, Montreal—and Israel, because, for the first time in history, they had the opportunity to go home. Indeed, so many families immigrated to Israel that in 1956, King Hassan, fearing that other Arab states would blame him for allowing immigrants from Morocco to strengthen Israel, forbade the Jews to leave.
After emigration was banned, Jews escaped clandestinely. On January 11, 1961, the Egoz, a small boat leased by the Mossad to smuggle Jews from Morocco to Gibraltar, capsized. All forty-four of the olim drowned, half were children. After the Egoz disaster, the Jewish Agency and the Mossad worked with threatened Moroccan communities to rescue the children first. In Operation Mural, 530 Moroccan Jewish children were sent by their families on an ostensible holiday in Switzerland—and, from there, flown to Israel. 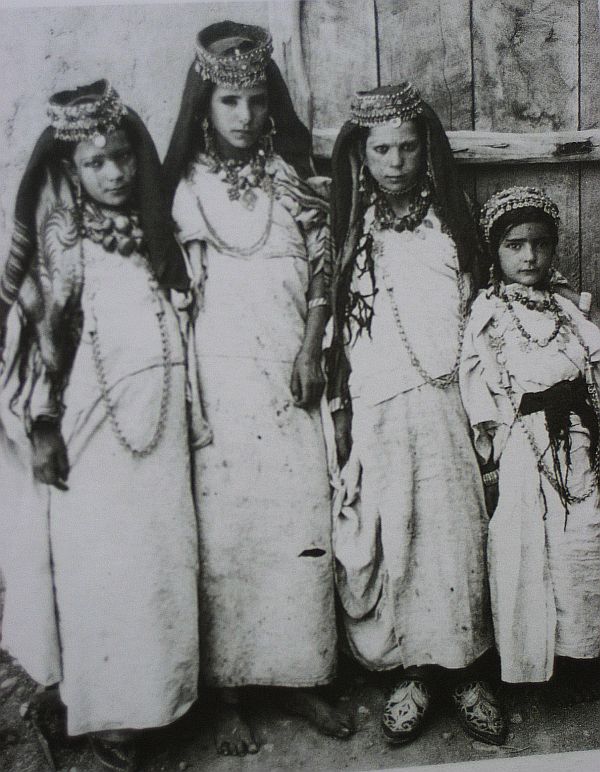 Jewish Berber girls. Courtesy of Juifs Berberes.
Four months later, a deal was struck for a larger emigration. King Hassan, embarrassed by the international attention paid to the Egoz drownings, agreed that Moroccan Jews could emigrate secretly, so as not to draw the attention of anti-Israel governments—and the king would receive an indemnity for each Jew who left. The figures were never released, but it is estimated that between $5 million and $20 million flowed to the royal treasury in exchange for the 80,000 Moroccan Jews who were allowed to make aliyah between 1962 and 1964.
The last Berber Jews left Tinghir and other Berber towns silently, in the dead of night.

Same article in the Jerusalem Post (with thanks: Michelle)

Email ThisBlogThis!Share to TwitterShare to FacebookShare to Pinterest
Labels: Jews of Morocco, Jews/Berbers

"On January 11, 1961, the Egoz, a small boat leased by the Mossad to smuggle Jews from Morocco to Gibraltar, capsized."

Now, can anyone imagine a Spanish boat with a HEBREW NAME sitting in the port of Casablanca in independent Morocco? Doesn't that strike Ms Appelbaum as odd?

I think I said that before, and it's worth repeating for those who might want to do some REAL scholarship: the boat's original name was the PISCES, and it was under that name that its story was covered at the time in major European newspapers. Calling it "Egoz" without putting its original name at least within brackets will hinder the efforts of those who might want to research the story.


This is not the only problem with this article which clearly draws on Israeli sources. The attacks of the 1950s which sent the greatest number of Jews fleeing from their homes, and account for the mass immigrations of the 1950s and beginning of 60s (which is why we call them the alyah of the 1950s), have been occulted in order to glorify then Mossad Chief Isser Harel with "bringing Jews". That has occurred only in the past decade or two, but amnesia is now settling hard.
It was really blatant in an Israeli radio program for Israel's 60th Birthday that I listened to.

One thing is to have a thesis, another one is suit the facts to that agenda.

Morocco was apparently known as a country where the Jews were persecuted before the French occupation in 1912.
In 1882, Leon Pinsker, a Zionist before Theodore Herzl, published his Zionist pamphlet AutoEmancipation. In the book he names Russia, Rumania and Morocco as lands of Jewish persecution. Georges Bensoussan comments in his annotated edition of Pinsker's book [in French 2006; p63] that Pinsker should have mentioned Persia too as a land where Jews were oppressed severely. Bensoussan points out that neither Persia nor Morocco was part of the Ottoman Empire. We may deduce that bad as that Empire was for Jews, Muslim lands outside that empire were worse.

The Ottoman empire was forced to become more tolerant by the western powers exerting pressure on behalf of Christian minorities. Dhimmitude was eventually abolished there in the mid-19th c, but it continued to apply well into the 20th in Persia, Morocco and Yemen. Yemen was another place where the Ottomans never had consistent control. Jews were worse treated in Yemen and Persia because the Shi'as had extra restrictions on them, treating them as najas or unclean.

As I am reading the Littman/Fenton's book, it is a lot worse than we ever knew. The mental cruelty is something you could hardly imagine today. And all from first hand documents and reports.